Hi friends! Happy Friday! Hope you’re having a wonderful morning. I had to separate my Friday Faves post into another post (which will be up later this afternoon), because this post turned into a bit of a novel. I just had so much to say about my first tattoo experience!

I finally did it, and am so happy with how it turned out. 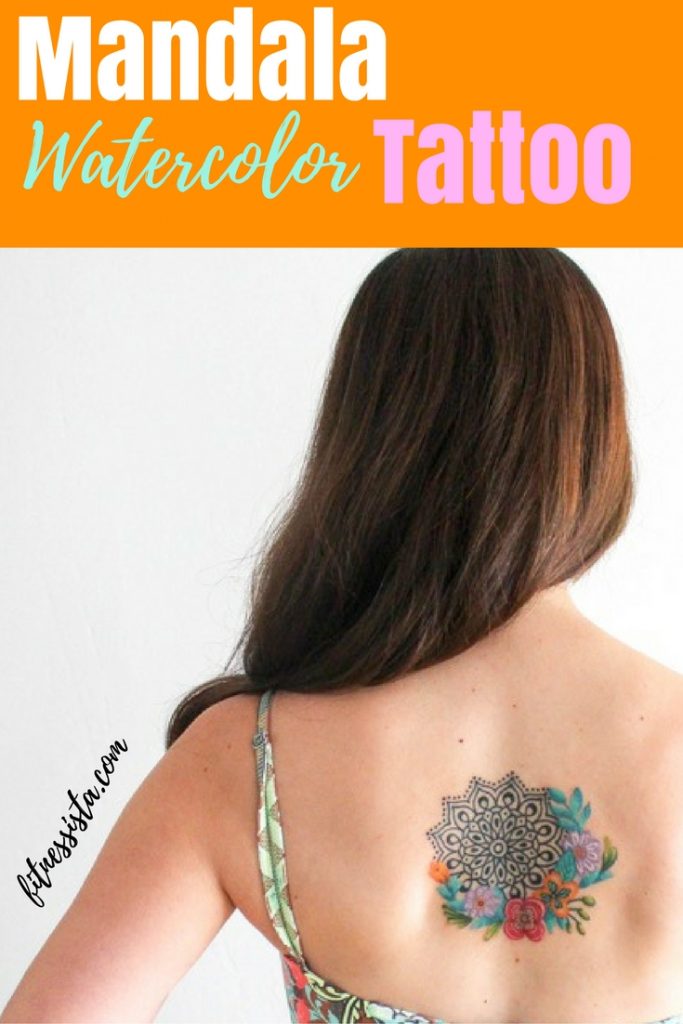 So as you guys know, I’ve been wanting a tattoo forever; at least 10 years. The Pilot has never really been on board the tattoo train, but after I had P, I was like, “I birthed our babies, I want a tattoo.” and he didn’t say anything to disagree haha. 😉

One night before dinner at Brooklyn Girl, my mom, Betsy and I ventured into Buju Tattoo. (They don’t know I have a blog or anything like that. I just like to spread the word about good people and places when I can.) 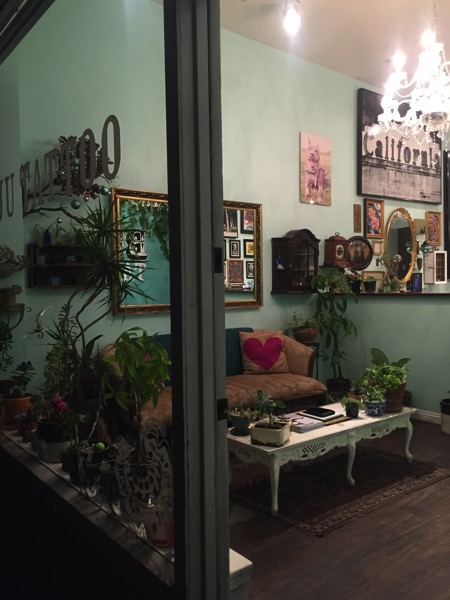 I had researched quite a bit online and knew I wanted my tattoo from Buju. They had exactly the style I was going for, and while the owner (Briana– she is AMAZING) is not taking new clients, I knew one of the artists there would be able to do what I had in mind. 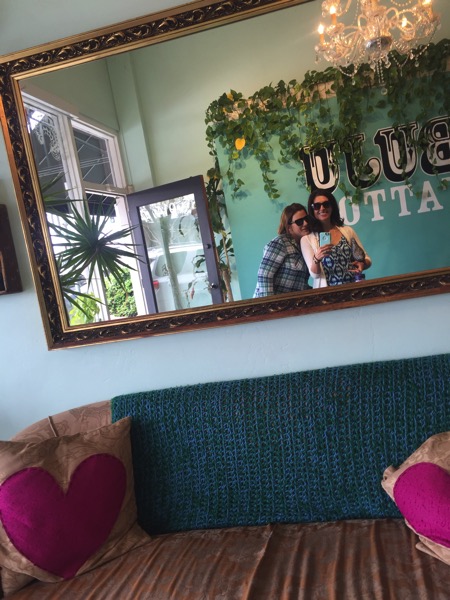 Right away, I was blown away by the interior. It is so unique, incredibly clean, and filled with fun plants, crystals, and antique pieces. We talked to Curtis for a while, learned more about him and checked out his work, and we paid our deposits to get our tattoos with him. He was so easygoing, confident, and had a great portfolio, so I felt completely at ease knowing he’d be the one to take a vibrating needle to my back haha.

I was SO excited, but super nervous. I decided to wait until after my surgery since you’re not supposed to get sweaty/dirty immediately after your tattoo. Before my surgery, I didn’t want to waste precious workout time since it was going to be taken away from me. This gave me something to look forward to. 😉

For my tattoo design, I’ve always wanted a mandala or some type of lotus flower. After googling around, I came across the newer watercolor flowers (which aren’t outlined in black and look so pretty and delicate) and thought it would be cool to combine the two. I texted Curtis a few ideas, and here’s what he came up with. When I saw it for the first time, it was like he’d gone into my brain and designed exactly what I was hoping for. 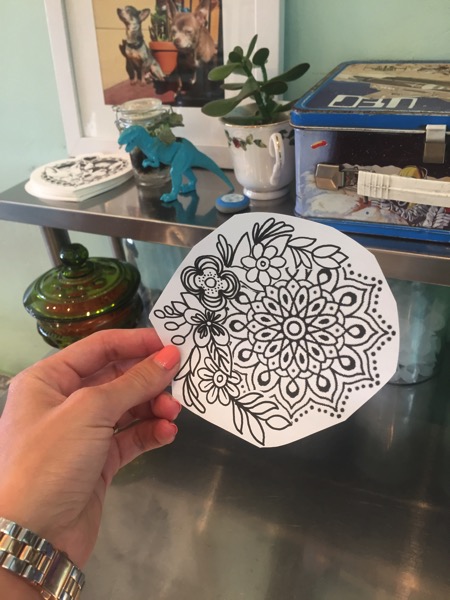 Betsy made me go first because I think she knew I’d chicken out if I watched her get hers done. Curtis cleaned my back and placed the stencil on. Betsy said she could never picture me with a tattoo, but once the stencil was there, she said it looked like it was always supposed to be there. I knew it was *the one.* 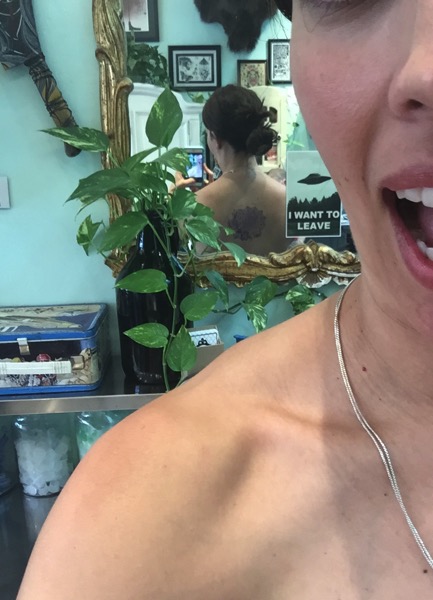 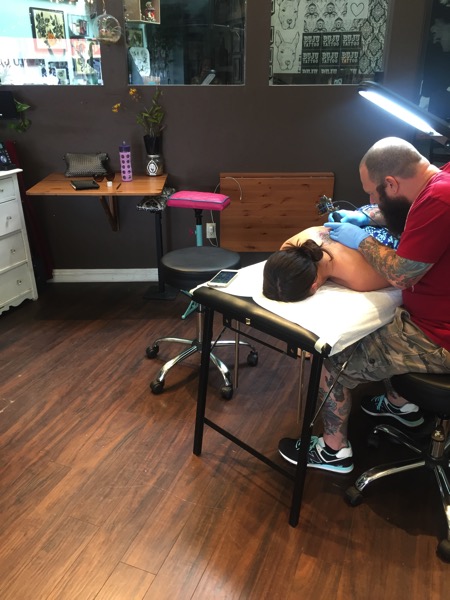 So as far as the actual tattoo process goes, it hurt. Like, A LOT. Way more than I was anticipating! The first 5 minutes were the absolute worst, and the entire thing took about 2 hours. He started and I was like, “What am I doing? Why is this hurting so much? I can’t quit now because it will look weird with random dots and lines on my back.” I couldn’t even talk while he was doing it. I would breathe, stare at his cool New Balance sneakers, and listen to his conversation with Bets. 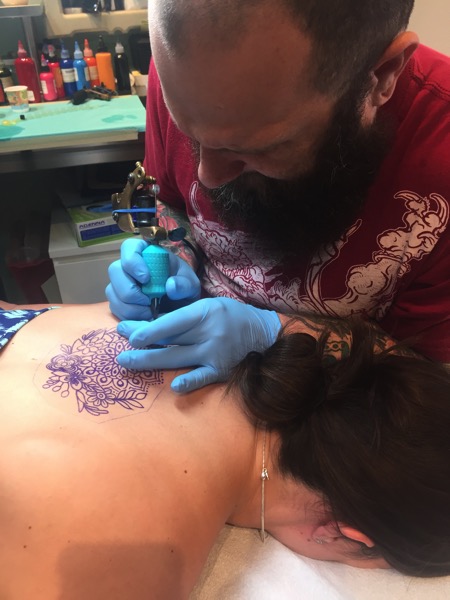 After a while, it became almost meditative. I am a GIANT needle phobe, and absolutely hate shots and medical procedures. This felt different because it was a needle and a pain that I chose. Exactly one week before my tattoo, I was being injected with needles that weren’t necessarily my choice, but were necessary to fix my medical issues. I was lying on a table, in a room, surrounded by doctors small-talking me before the anesthesia kicked in. Exactly one week later, I was lying on very different table, still in pain, but celebrating.

the end of P’s reflux, and the end of countless nights enveloped by fear that she’d start choking and stop breathing again

the end of the constant pain and discomfort I’ve felt for the past 5 months following the birth. I would cry all the way home after teaching spin because I didn’t know what was wrong with me. After my repair surgery, I feel a thousand times better.

the end of a scary medical issue for a close family member that began over the holidays. I haven’t gone into this on the blog because it’s personal for my family, and it also felt too big and real to write about. We are so blessed that this family member is doing amazingly and on the up and ups

and the end of my postpartum depression.

After all of the pain, something beautiful emerged. 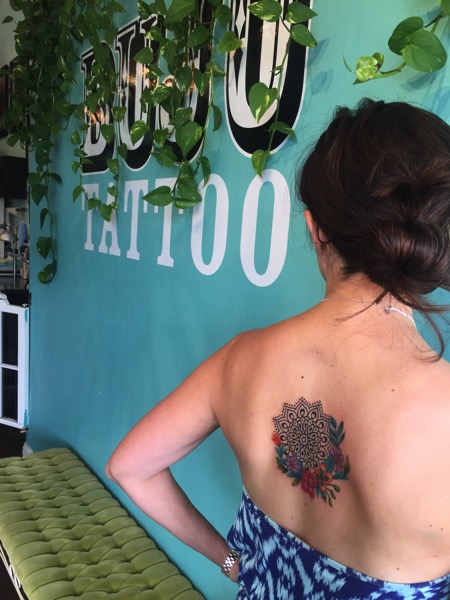 When I got home to show my mom, she said, “Happy New Year.”

Also, a mean joke: tattoos hurt AFTER they’re done, too. Mine is still achy (feels like a sunburn), but I can’t stop looking at it.

The colors are already so much brighter. 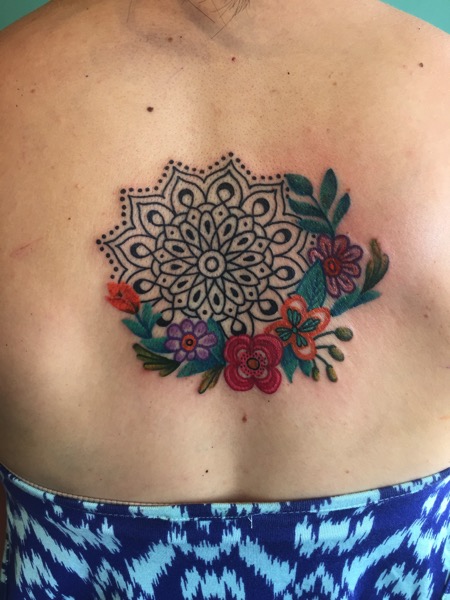 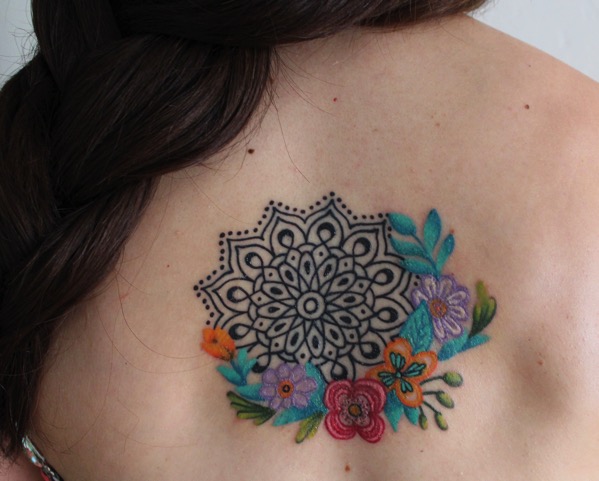 Posted in just for kicks, san diego and tagged tattoo