Just one month shy of her first birthday, 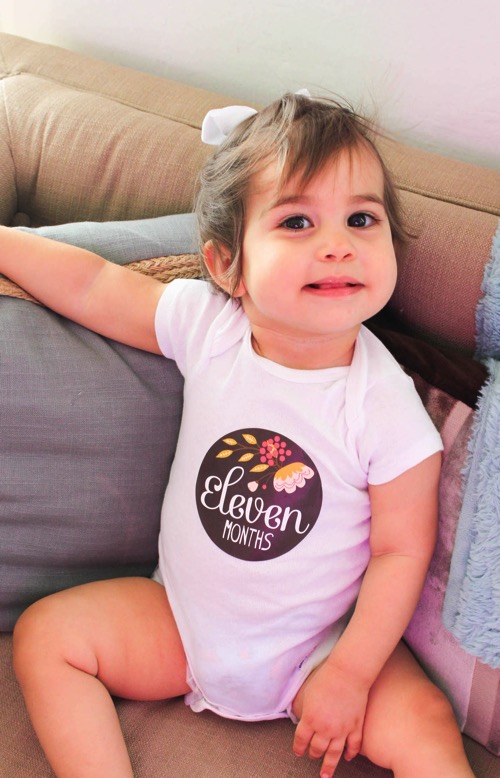 cracking us up, and making each day even brighter. 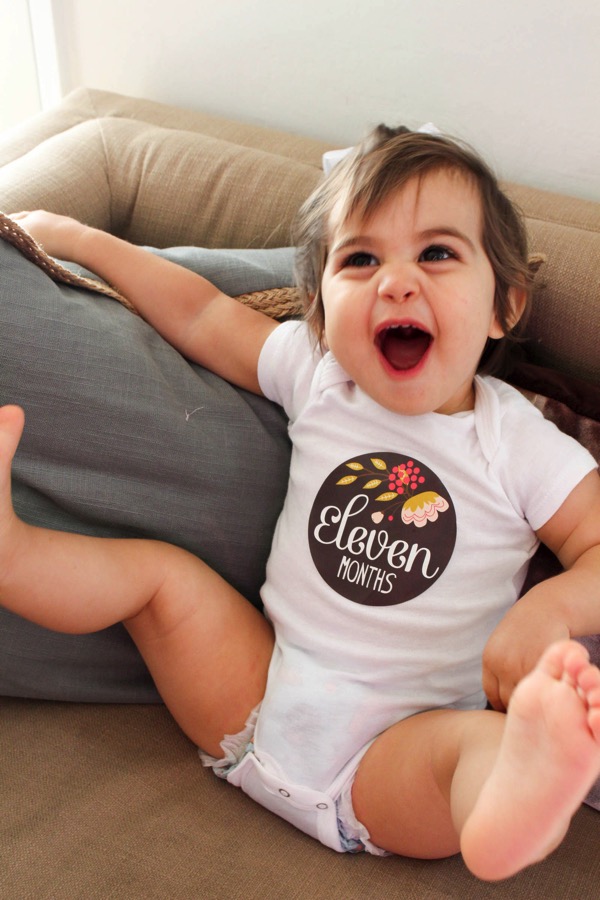 -P has been able to stand freely for a couple of months now, and just recently started taking a few steps. She’ll stand with the biggest smile on her face, walk 2-3 times, and (thankfully) catch herself on the floor with her hands so she doesn’t faceplant. She does like to “walk” if we hold her hands, and is still crawling all over the place. 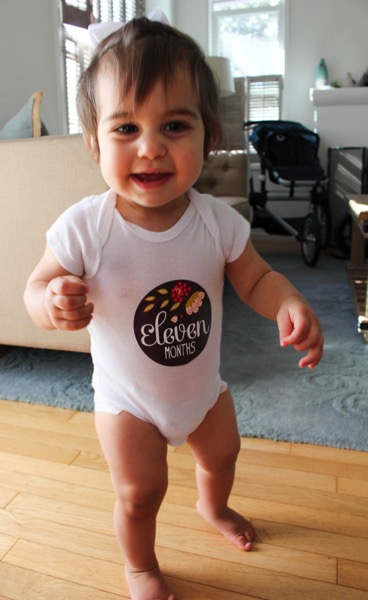 -A huge change from this past month is that we dropped the dream feed. Ever since she was about 6-8 weeks old, we’ve woken her between 10 and 11pm to change her diaper and feed her. It’s a strategy from The Baby Whisperer and I’m convinced that the dream feed, in addition to a solid routine, helped the girls sleep through the night fairly early. For the past few months, when we’ve opened the door to dream feed P, she would wake up from her sleep, stand up in the crib, and start jumping and cheering while holding onto the railing. In other words, there was nothing dreamy about this feed. It was a “wide awake party” feed. 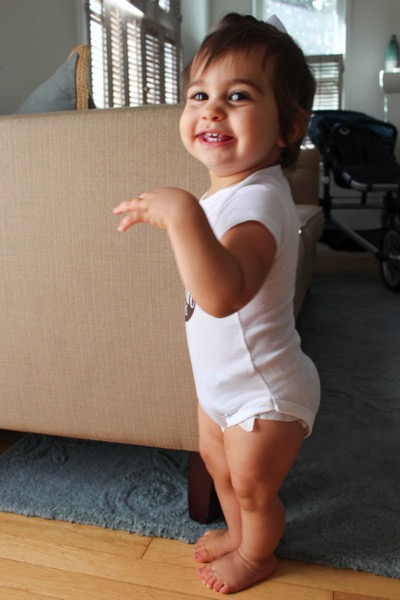 Since she’s been sleeping through the night, and eventually the dream feed felt like it was inconveniencing her more than anything -she started drinking less and less of the dream feed bottle- we decided to drop it and see what happened. I couldn’t remember when I dropped it with Liv, but had a feeling it was before she was a year old. Either way, dropping it thankfully didn’t affect her sleep at all. And the good news is that we no longer have to stay awake to dream feed her, even though let’s be real, we still go to bed at midnight anyway.

-She is a cuddle bug. She gives the best hugs, and enthusiastic kisses with a MUAH at the end.

-I think she will always think Olivia is the coolest. While they’re in their carseats, Liv will make faces and talk to her, and P laughs the whole time. It’s amazing to get to watch them grow together, and see how their connection changes and becomes stronger each day.

-Meal time continues to be so much fun, and I love introducing her to new foods.We’ve had a couple of freak spit-up incidents lately, but I’m thinking it’s just because she’ll often crawl or jump around immediately after eating. It’s hard to keep her still now after meals!

A huge change: SHE HAD DAIRY! We’ve had these baby breakfast pouches in the pantry for a couple of month, which had brown rice, fruit and organic yogurt in them. (I guess to yogurt is super pasteurized so it’s shelf-stable.) One morning, I was just like, “You know what, let’s go for it” and was ready for a quick drive to the peds if needed. I gave her a tiny bit mixed with her morning oatmeal and watched her like a hawk. She wanted more!! I held off until the next day, and gave her the rest of the pouch on its own. She was totally fine. YESSSS. The peds said that a majority of babies outgrow their dairy allergies by a year, so fingers crossed this is the case. She seems to be ok so far, knock on wood.

whole eggs (before I was just giving her the yolks)

We’re still mixing purees with baby led weaning, and I’ll have a post coming up about how we mixed the two since I’ve had quite a few questions about it!

-Miss P is babbling a ton, but not a lot of official “words.”

She can also replicate animal sounds really well, and I love when I ask her how big she is, she puts her arms up and says, “BIIIIIIG!”

She is such a sweet, fun, mellow, joyful little star. Can’t wait to celebrate one year with her!

Carters jammies (we go through so many!)

Our Honest diaper bundles <– referral link (I wish we would have done this with Liv!!)

This silicone placemat (we take it everywhere with us)

Posted in family, life with two and tagged Penelope