Hi guys! Happy Friday <3 I’m a little late posting because due to horrendous traffic, we got into Orlando LATE last night! 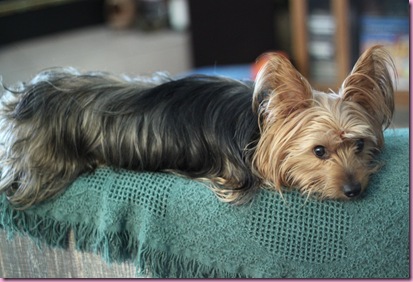 (that’s Scamp, my aunt’s yorkie. I call him Scampi)

I’m awake and about now 🙂 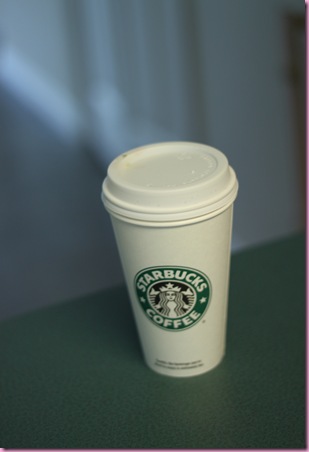 Some of my favorite probiotics and coconut destined for macaroon glory: 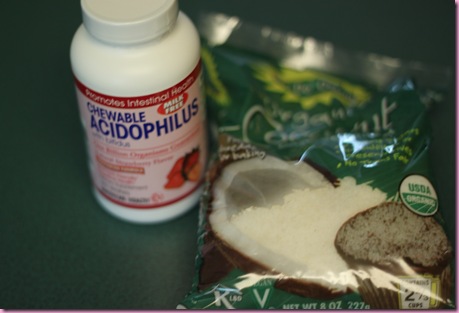 And bagels for the Pilot and me 🙂 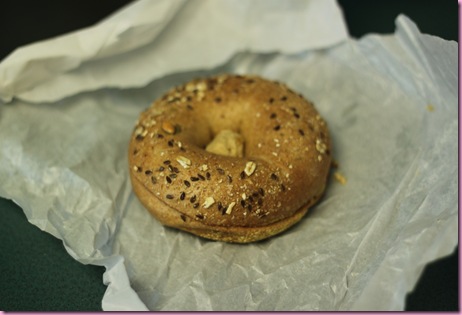 We have no idea what we’re going to do today, but I’m begging to go to Harry Potter 😉 Lots of yoga is on the agenda fo sho 🙂

See ya later with shenanigans and a boot camp workout!

Something to talk about: Telling other people about how you choose to eat. I got this question in an email yesterday and it was very similar to quite a few I’ve received about this topic:

When you and "The Pilot" first started dating, was it weird to go out to eat and have to explain your healthy eating habits to him? How did you go about dealing with that, and what was his reaction?
I just never know what to do when I’m out with a guy and have to go into all that–I don’t want him to think I’m weird just because I don’t like to stuff my face with unhealthy stuff 🙂

In general, I think the blogging community eats a little differently than the Standard American Diet– which is a very good thing. Even though some of us might not be total health fanatics, I think that I can confidently say that most of us enjoy GOOD, real food more than the highly processed packaged stuff. The cool thing is that healthy eating is becoming more mainstream — people are making conscious decisions on how to fuel their proverbial tank, which can make us seem less weird for being choosy about our eats.

On my first date at PF Chang’s with the Pilot (when I thought he might secretly be a serial killer because he was too nice), he asked me what I was going to order and when I told him my choice (Buddha’s feast with tofu and brown rice), he asked if I didn’t eat meat or I just liked tofu. I explained that I ate white meat –at the time I was still eating chicken- and he just wanted to double check to see if I’d share the chicken lettuce wraps with him. (For the record: Lettuce wraps go right up there with spaghetti and tacos as messy first date meal choices)

I didn’t have to explain the whys or hows of my eats to him, and rarely need to explain myself to other people. Sometimes people will wonder why I choose to eat goat’s dairy instead of cow’s, seafood but not meat, etc etc, but I just give them a real basic “for health reasons and because I prefer the taste.” That’s it. As we’ve been together and my eats have evolved throughout the years, the Pilot has learned what I prefer and can go into any restaurant and order something that I’d love. All of my close friends are the same way. The more you hang out with the people, the more they’ll understand how you like to eat and I don’t think there’s any real need to explain the reasoning behind it.

Some of us have ethical reasons behind why we choose to nourish ourselves the way we do. I just prefer not to explain my choices to others because I don’t want to influence them or make them feel badly about their choices. Eating is a very personal decision and how someone else wants to stuff their face is none of my biznazz. I don’t think anything can turn someone off more than feeling like they’re being preached to, especially if you tell them about factory farming while they dive into a cheeseburger. It’s kind of like the bad boy boyfriend… even though your mom tells you he’s bad news and you should break up with him, you don’t fully understand until he breaks your heart and you learn for yourself. Like eating- the best eating method for you won’t really *click* for you until you teach yourself and learn from experience—what others say usually wont have too much of a pull.

A great way to show others about our healthy choices is to make something healthy and delicious and share it with them. When they ask for the recipe, you can tell them that it’s vegan/vegetarian/whatever and maybe they’ll be more willing to experiment with different types of eats.

So what do you guys think? Do you tell others about why and how you eat the way you do, or do you just let it be and watch them figure it out? How do you feel about others preaching about their eating views??

For a similar post, check out *When Food and Family Collide*

Posted in breakfast, mumbo jumbo, something to talk about, vacation