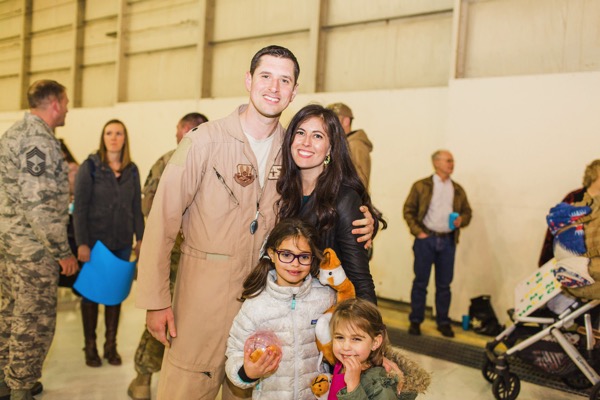 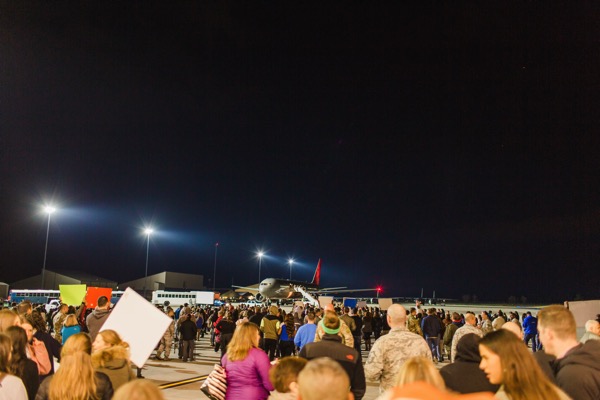 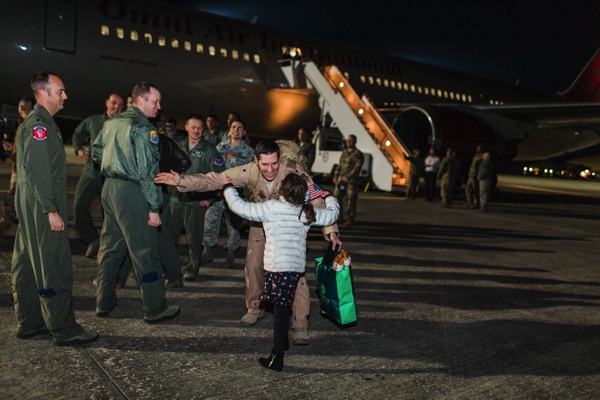 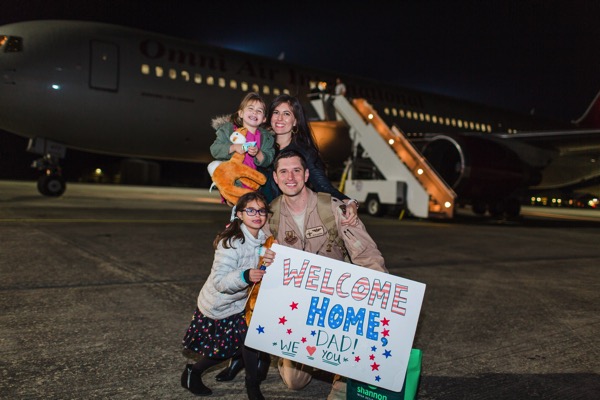 After 7 long months, the Pilot is finally back!

He was deployed, which was a huge reason why we came back to Tucson. I’m very sorry I wasn’t able to post more about it in the moment. With past deployments (this was #4!), I’d usually avoid talking about it for as long as possible, and then when I’d have some sort of breakdown, I’d share the news, craving connection and your stories of going through the same thing. In this particular situation, it didn’t feel like a smart idea to shout from the rooftops that we were alone. With the kiddos, I felt so much more protective this time. I really wanted to talk about it and share my thoughts and honestly, get some virtual hugs because man, did I need them, but there were more reasons not to talk about it than to share this on the blog.

Last week, we went back to Valdosta to pick him up, and it was one of the best nights of my life. I feel like a lot of our trip was a blur, especially since we hit some major travel snafus. It also didn’t seem real! After being alone for so long and getting used to taking care of things for the girls and house, it never really felt like it had an end point. Even though the excitement that he was actually coming home kept me from remembering a lot about the week, there are quite a few moments that stand out in my mind: 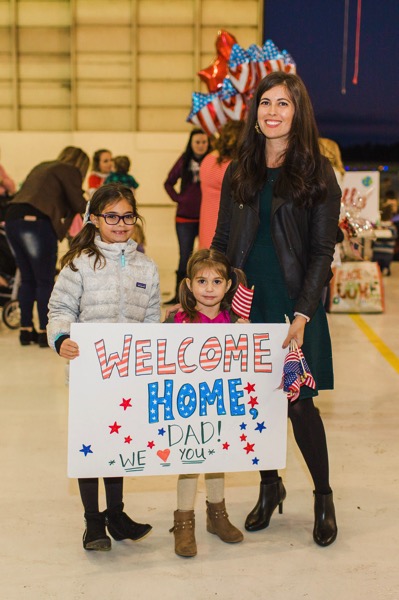 – Waiting in the hangar with over 100 other families, holding “Welcome home” signs and balloons. They had jumping castles for all of the kiddos, tons of snacks and drinks, and you could just feel the excited buzz in the air. 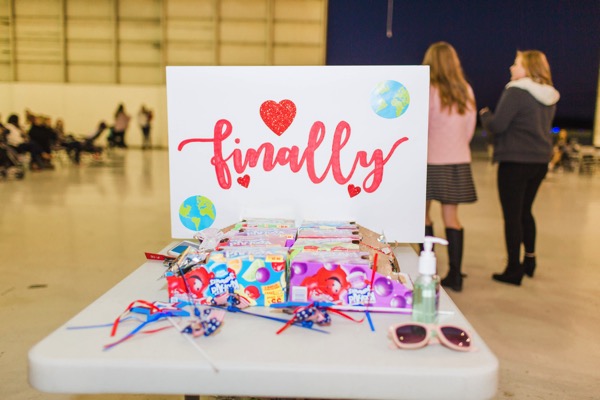 When the plane landed and started taxiing towards the hangar, the entire building erupted into cheers. Everyone was doing at least one of the following things: cheering loudly, waving a sign or flag, or if they were under 4 ft tall, literally jumping up and down with happiness. 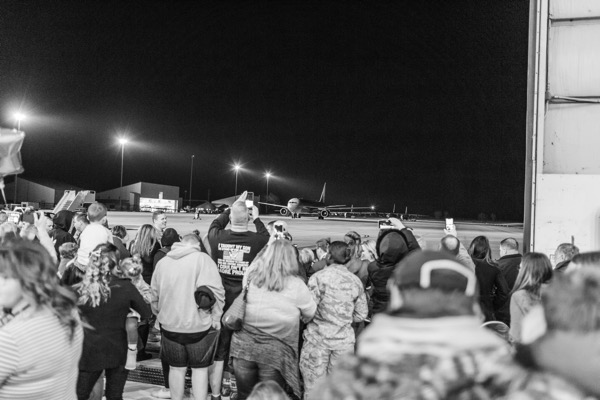 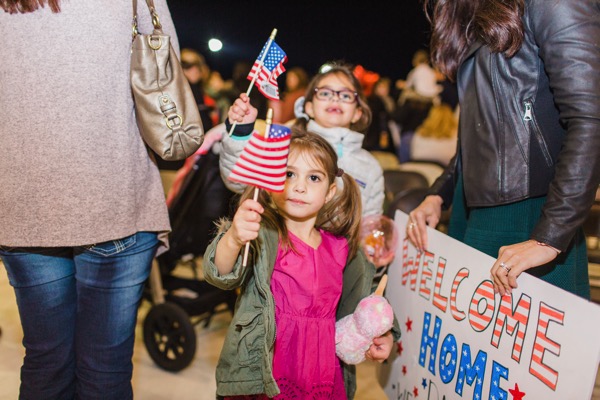 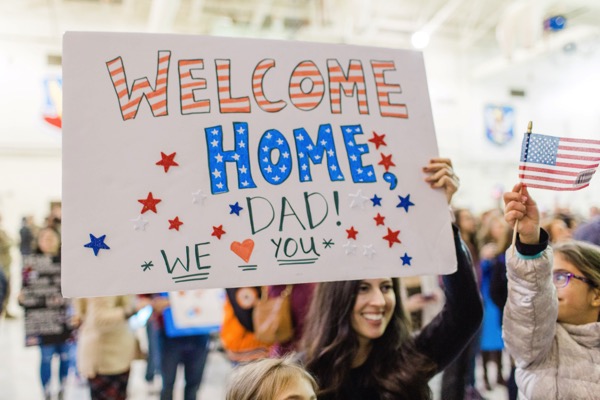 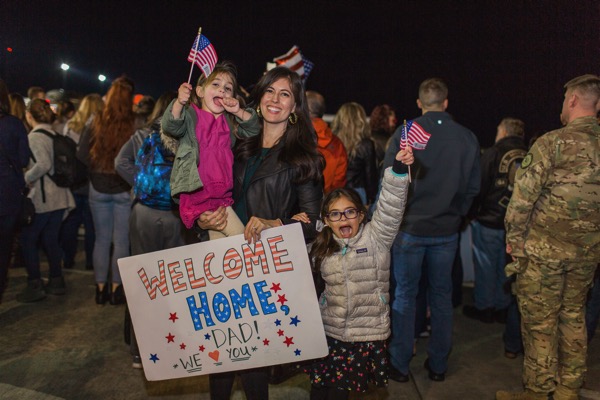 – I noticed a handful of red star balloons in the room. I thought it was cute that a few families had ordered the same balloons, and then I found out the reason behind them: each balloon was for a baby who hadn’t yet met their dad. These men were the first ones off the plane and they got to hold their little one for the first time. Just typing that makes my eyes sting with tears.

– Getting to see my friend Lindsay! I missed her dearly – she took all of my workout pics while we lived in Valdosta and became a close friend –  and it was so amazing to hang out with her in real life and catch up. She captured all of the incredible images in this post and I’m so thankful for her. I also got to meet Damian, who helped me out with some iPhone videos. We’re putting them together now into one video and I can’t wait to share it with you.

– Seeing Liv run towards him is something I’ll never, ever forget. I was holding P – it was cold and she was a little tired/chilly – and when we finally saw Tom, I was like, “Livi! There he is!!” and she TOOK. OFF. She tried to wait patiently while he gave the guys handshakes as he got off the plane, but as soon as he saw her, he bent down to give her the biggest hug, then swooped her up and held her. 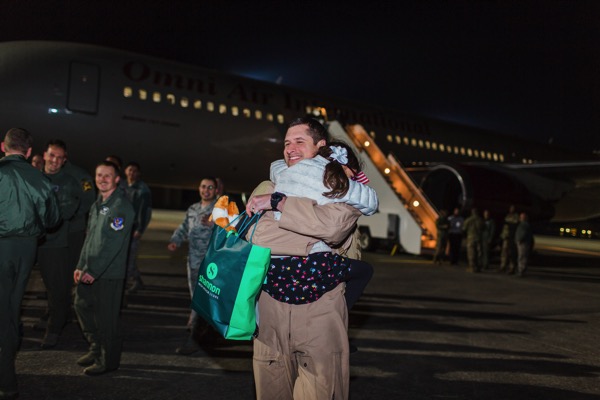 – Being back in his arms. We’ve been back in Tucson since last summer, but it wasn’t until that moment that I felt like I was home. The honeymoon feeling when they come back truly is the best thing in the world. The girls and I have been soaking up this time with him, and I feel so thankful that he made it here safely. 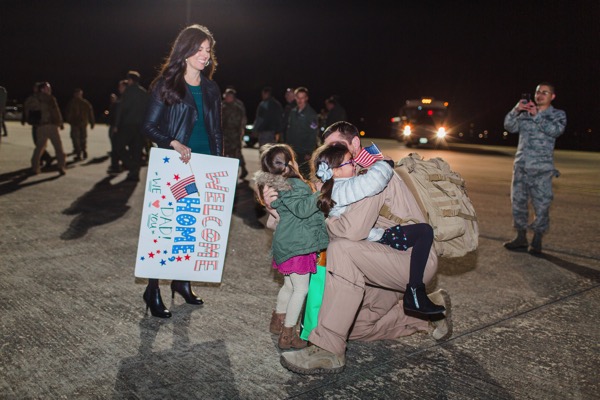 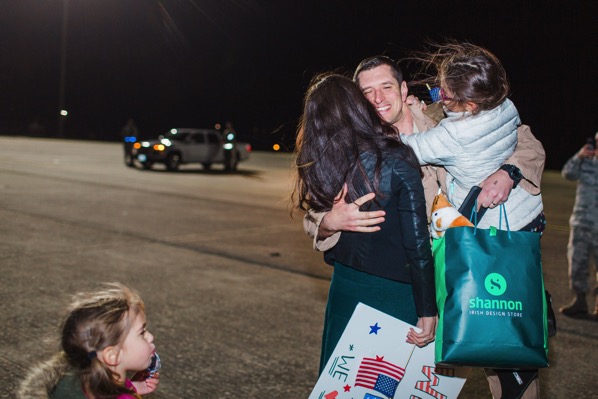 I have so much to tell you guys and finally feel like I can take a deep breath. I have a few posts that I’ll share this week – I don’t want the blog to feel like deployment overload but I feel like I can finally tell you everything!! – but I just wanted to say thank you for being here this entire time.

For now, I’m off to drop the kiddos at school and enjoying a mimosa with my favorite guy.

Have a happy Monday and I’ll see ya soon!
xo

Thank you again to Lindsay Colson for the photos. We’ll treasure them always. <3