I’m getting waryyyy too comfortable with our Trader Joe’s routine. I put Livi in the baby carrier (the BabyHawk or Ergo), grab a cart, and blitz through the store, often in 15 minutes max. It has to be fast and furious, because Livi loves to snack her way through Trader Joe’s and I try to avoid opening more than one package at a time 😉 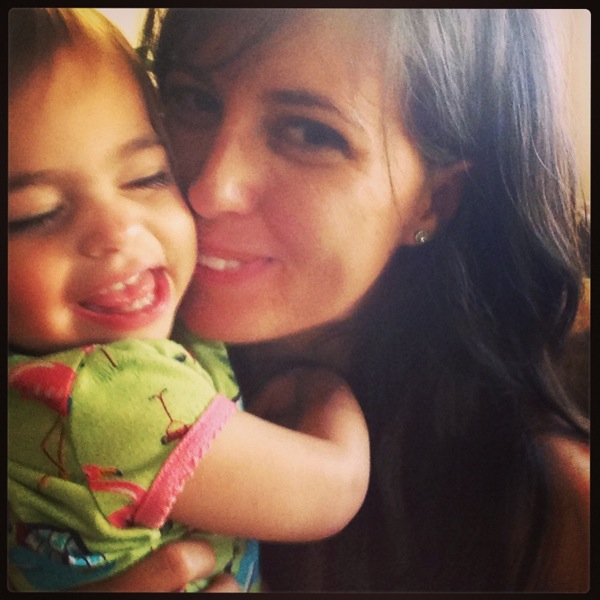 I usually grab the same core group of things in this order:

-Chocolate at the register 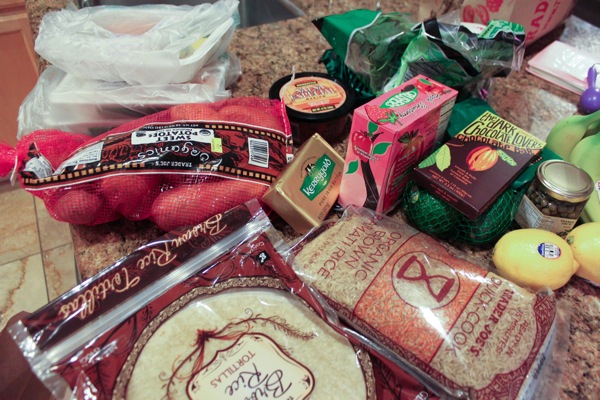 Whenever I have our meal plan with us, I’ll just grab whatever items are on the list in that particular department. No matter what I have planned, I always come home with salmon, sweet potatoes and a green veggie which we’ll have for dinner one night. We’re creatures of habit, plus it’s healthy, easy and Liv loves it, too. We’re big fans of the salmon, sweet potato and asparagus combo.

So, last night, when I found myself staring at those 3 ingredients, I decided to switch it up a little since I had time to prep dinner during Liv’s nap.

Within 10 minutes, I made some super fancypants salmon, which was also insanely easy. 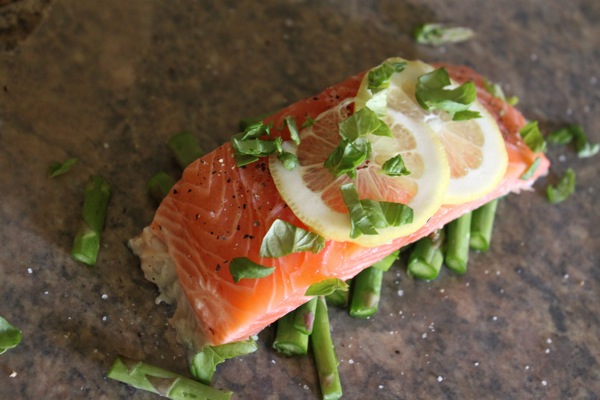 I rolled out some parchment paper, then added chopped asparagus for each serving, plus salt, pepper and a drizzle of olive oil: 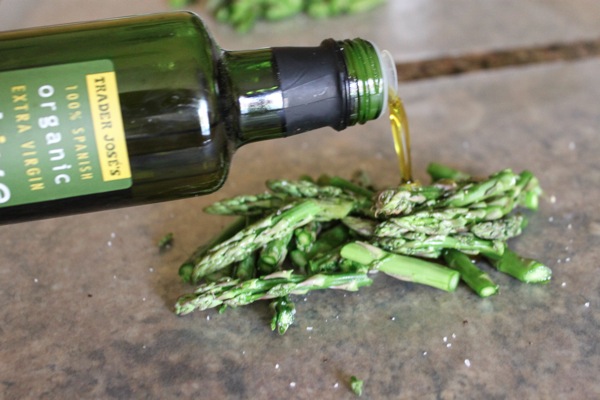 I added a giant piece of fresh salmon to each asparagus pile, then seasoned it with salt, pepper, olive oil, 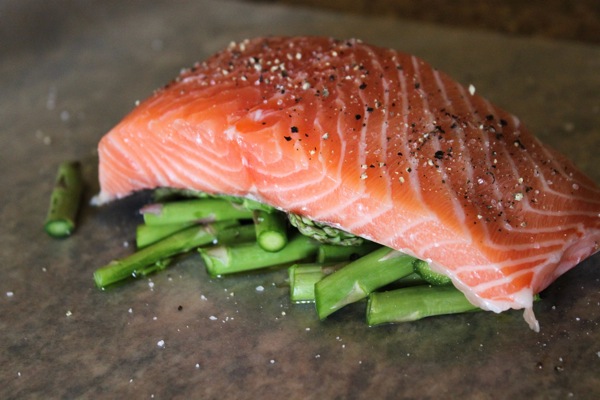 and fresh basil from our little herb garden. 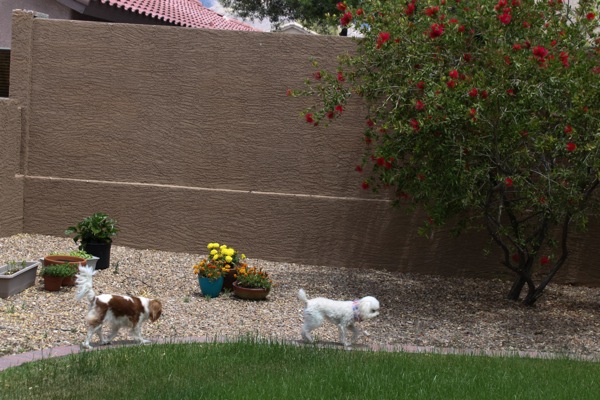 (Caro and Bell helped me)

Then, each pile got a could of lemon slices, 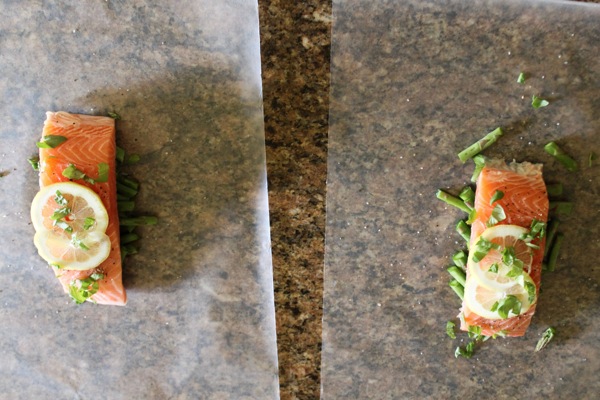 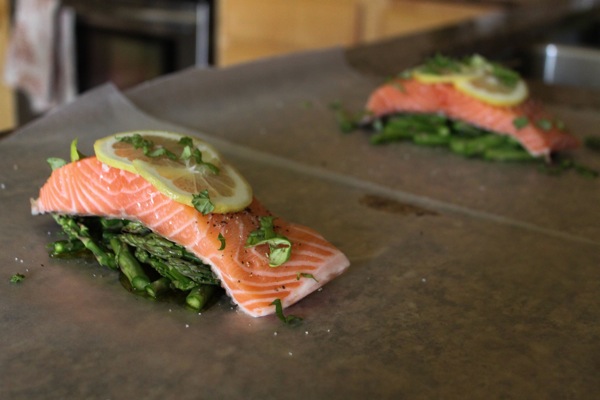 (Check out the size of these beauties) 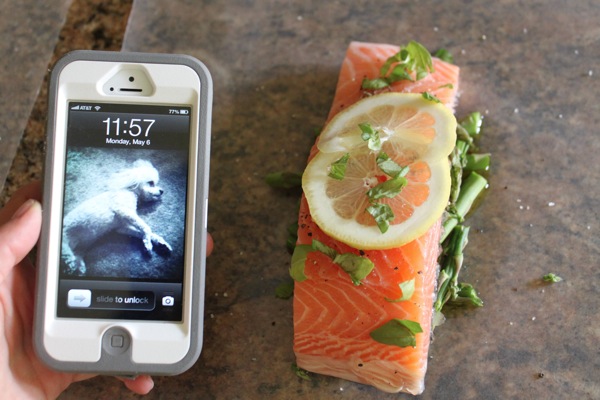 Then I rolled everything up, secured with some twine, and placed in the fridge until dinnertime- they just needed to bake at 375 for 20 minutes. 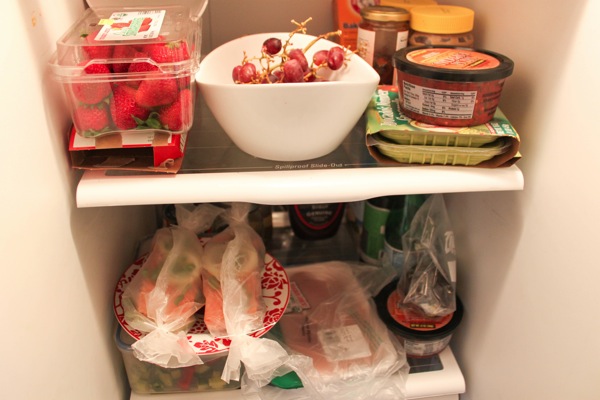 Did anyone else notice a major fail whale?

I used WAX paper instead of parchment paper. Even while this was all happening, I thought to myself, “Hmmm.. this feels a little waxy” and didn’t bother to check :/ So instead of baking it in the paper, I just rolled everything off onto a cookie sheet and baked that way. (If I would have left it in the wax paper, it would have been a smoky, waxy mess. The hilarious thing is that the parchment paper was RIGHT next to the wax paper in the pantry.) So in the end, it ended up being verrrryyyy similar to our usual salmon, sweet potato (just plain baked with butter and cinnamon), asparagus combo, just with different seasonings (which were rather lovely- the basil was awesome). I guess it was one of those “if it ain’t broke…” kinda moments 🙂

If you make this at home, be sure to use parchment paper! Also, it would be a fantastic meal for entertaining since you can prep everything ahead and just bake when the guests arrive. Very little cleanup, too.

This afternoon, I have some fun wedding errands to do with Liv, and it’s also dance week at work. I’m on a mission for some super baggy sweatpants for recital.

Hope you have a great day and I’ll see ya later with a post about running with a baby.

Looking for a quick workout blitz? Try my last ab burner! It’s perfect to bust out during a study break, at the end of a workout, or before bed.

Open
An equally weird and good Easter. 🐣 🐰We had

Open
Hands in the air if the kiddos think that working