Hey everyone! How’s your night going? Mine has been glorious because I got to come home an hour earlier than anticipated. The reason is kind of a bummer because one of my clients is moving and I won’t be training her anymore :/ But anywhoo…

I LOVED reading your comments about whether your sig other works out with you or not. I would love to work out with the pilot more, but I’m not dragging him to Zumba 😉 Spin is another story though.

I stopped by the juice place after finding out that the health food store was closed (and tweeted my frustration). II’ll have to go one more day without almond butter! At least I got some delicious juice: 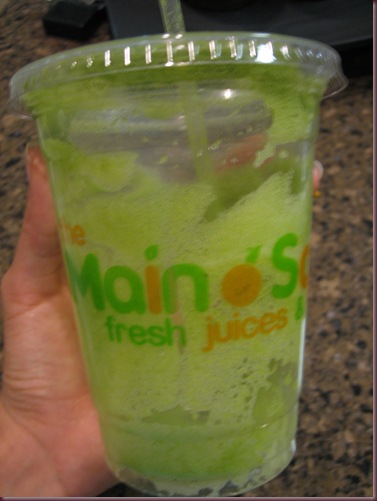 I took Jeni a smoothie and she had some blueberries that she picked today for me! 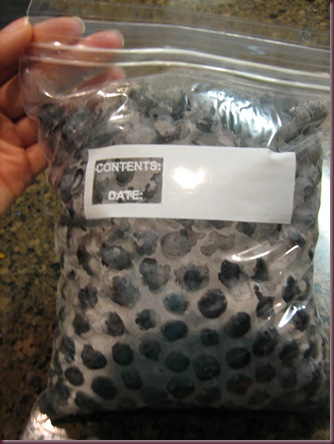 I had a training appointment shortly after that and then came home for lonchi. 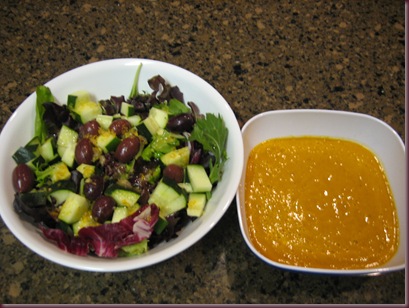 Raw Carrot Renew soup (a Natalia Rose recipe).. it had curry in it, and as we all know you could put curry on a shoe and I would eat it 😀 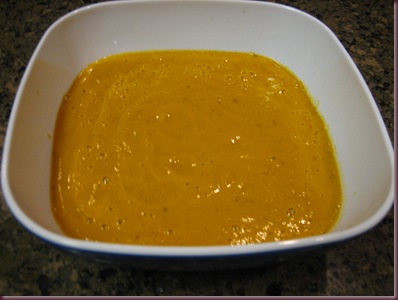 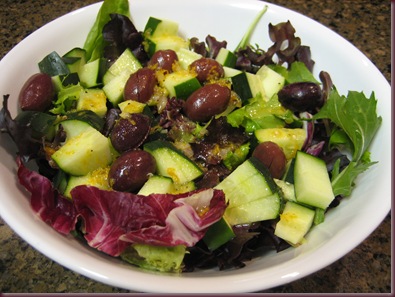 After the glorious feast, I made the pilot some easy slow cooker cacciatore 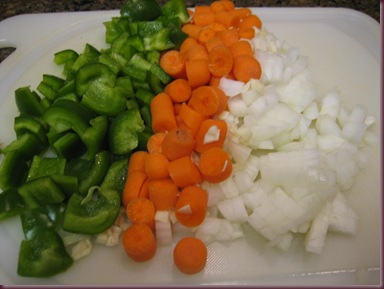 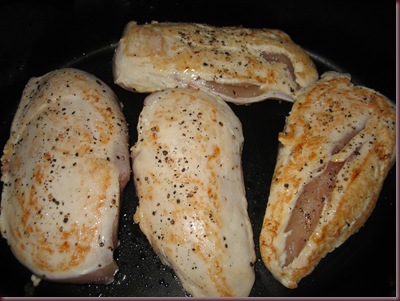 Top with a jar of your favorite spaghetti sauce, chopped veggies, a container of sliced mushrooms and fresh basil, oregano and rosemary 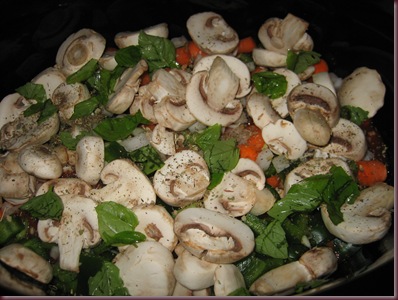 After making the pilot’s dinner, I packed up my dinner to munch after spin, Zumba and my training appointment that ended up being canceled.

Sunshine southwest burgers on romaine with mustard and bell pepper: 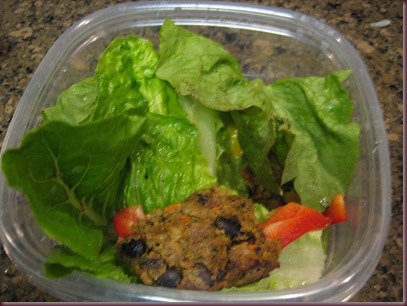 And half a container of grape tomatoes: 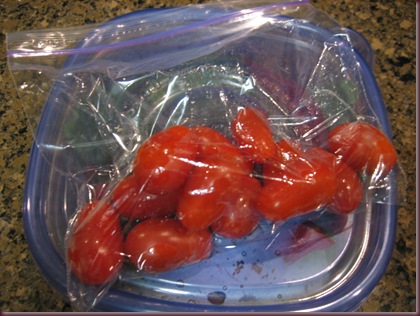 A side of lazy puppy: 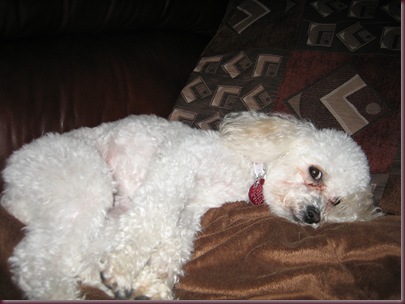 Before training, I had my favorite Larabar flavor: 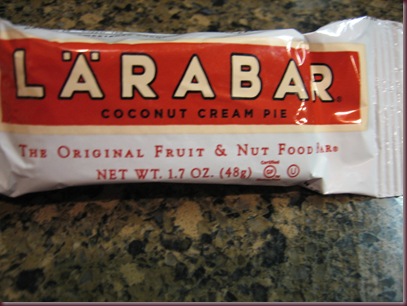 Have any of you guys tried the NEW flavors yet?? Tropical something, peanut butter and jelly, and German chocolate cake?? I’m dying to get my hands on some, but I’ll have to wait until we make a roadtrip so I can try them 😀

Spin and Zumba were a blasty, but a little bit of insanity went down!

It started POURING during spin and the power went out for a second… soon after, my friend Kelly came into the spin room and told me I should go move my car because the water had flooded up to my doors!! After spin, I had to wade through knee-deep water to get to my car and move it before I could teach Zumba. Crazy, huh?!?

So here I am, finally back in the casa, in jammies and all is bueno. Megan and I were going to have a Super Charge Me cookie extravaganza, but we’re waiting until tomorrow because someone (I have no idea who!) finished off the almond butter and has to pick up some more tomorrow 😛

Have a great night and I’ll see ya in the morning!

Some thoughts on food combining: (Disclaimer: If you are currently struggling with ED or in recovery and think that reading about food combining may result in a trigger effect or is a sensitive issue, please skip this particular musing. I don’t ever want to offend or influence others, just share my experiences and what has worked for me and what hasn’t. Everyone is different and knows how certain things affect their bodies and minds—it’s up to us to use our best judgment)

Before I get started on this particular musing, I understand that some of you aren’t sure what food combining is. In a nutshell, it’s the concept that different types of food take different times to fully digest and by consuming foods across genres at once, it can result in poor digestion and waste accumulation which leads to excess weight. The idea is to combine like foods so that the body doesn’t waste excess energy digesting when it could be performing other functions—it’s making digestion an easier task for your body. There are five categories: dried fruit/nuts/seeds, fresh fruits, raw veggies, starches (and cooked starchy veggies) and flesh. Ideally, you wouldn’t consume foods from various categories within 3 hour increments, with the exception of raw veggies (which combine with everything) and bananas and avocados, which can combine in other categories. For more info, please check out my good friend Gena’s post on food combining as she as much more knowledgeable in this area (and all areas concerning the raw foods lifestyle).

Quite a few of you have asked if I have been following the food combining rules. I didn’t answer these questions intentionally.. not meaning to deceive you, but not quite sure what the answer to that would be as it’s been both yes and no for the past month or so.

When my friend Megan first told me about food combining (last summer, when she lent me the Raw Food Detox Diet book), I flat-out told her that it sounded like a bunch of garbage. It goes against everything I’ve been taught about nutrition (well-balanced meals, “stick-to-your-ribs food) and I seriously thought it was a boatload of nonsense. After dabbling with raw foods for the past year, I finally decided to give it a whirl. Why not, eh?

So I made a conscious effort to food-combine during the day, even though all bets were off at night (when I eat cooked food) and am so active with teaching aerobics/training every day. I liked it and I hated it at the same time. I felt pretty bueno (raw foods have a knack for doing that to ya anyway though) and I loved having fresh fruit in the morning or smoothies/juices because I’m not usually starving in the morning anyway. I hated the EMPTY feeling (the food doesn’t stick at all because you digest so quickly) and I’m used to being pleasantly full after meals. After meals, I didn’t feel fully satisfied even though I could technically eat to my heart’s delight as long as it was in the same category. The thing is, usually I didn’t want more food within the same category.. I wanted cheese with bread, and nut butter on everything, and also didn’t feel like I was getting the protein/carb/fat ratio I’m happy with.

Food combining works wonders for a lot of people, but not so much for me. I found that when I did miscombine, I felt like death. I don’t want to have nut butter on Ezekial bread and feel like death. I don’t want to eat perfectly healthy foods and feel badly afterwards. The more you combine, the harder it is on your body when you miscombine and I felt like I was training my body to feel icky when I wasn’t combining properly. I knew that there are some miscombinations I’ll always want to have- like almond butter on Ezekiel and goat cheese on sweet potato and nuts AND cheese on salad… I just like them 😀 SO I’ve decided that for the most part, I’m not gonna roll like that. I’m still going to do raw until dinner and will eat fruit on it’s own unless it’s in a smoothie but I will be no longer making a conscious effort to food combine.

Another big reason I’m not going to consciously combine is because of school. I know we’ll be making and tasting a lot of different things and I don’t want to be saying “sorry, I shouldn’t have that, it’s not dried fruits and nuts time for another 2 hours”. I want to live it up, yo and not be bloated and lethargic from miscombining.

I definitely will tell you that combining works. If you have stomach ailments or digestion problems, from what I hear, it can do glorious things. I know quite a few people who speak very highly of food combining and it has changed their lives. So if it’s something you’ve been wanting to try, you could give it a whirl and see if you love it, or if, like me, it’s just not for you.

Have you tried food combing before? What do you think??