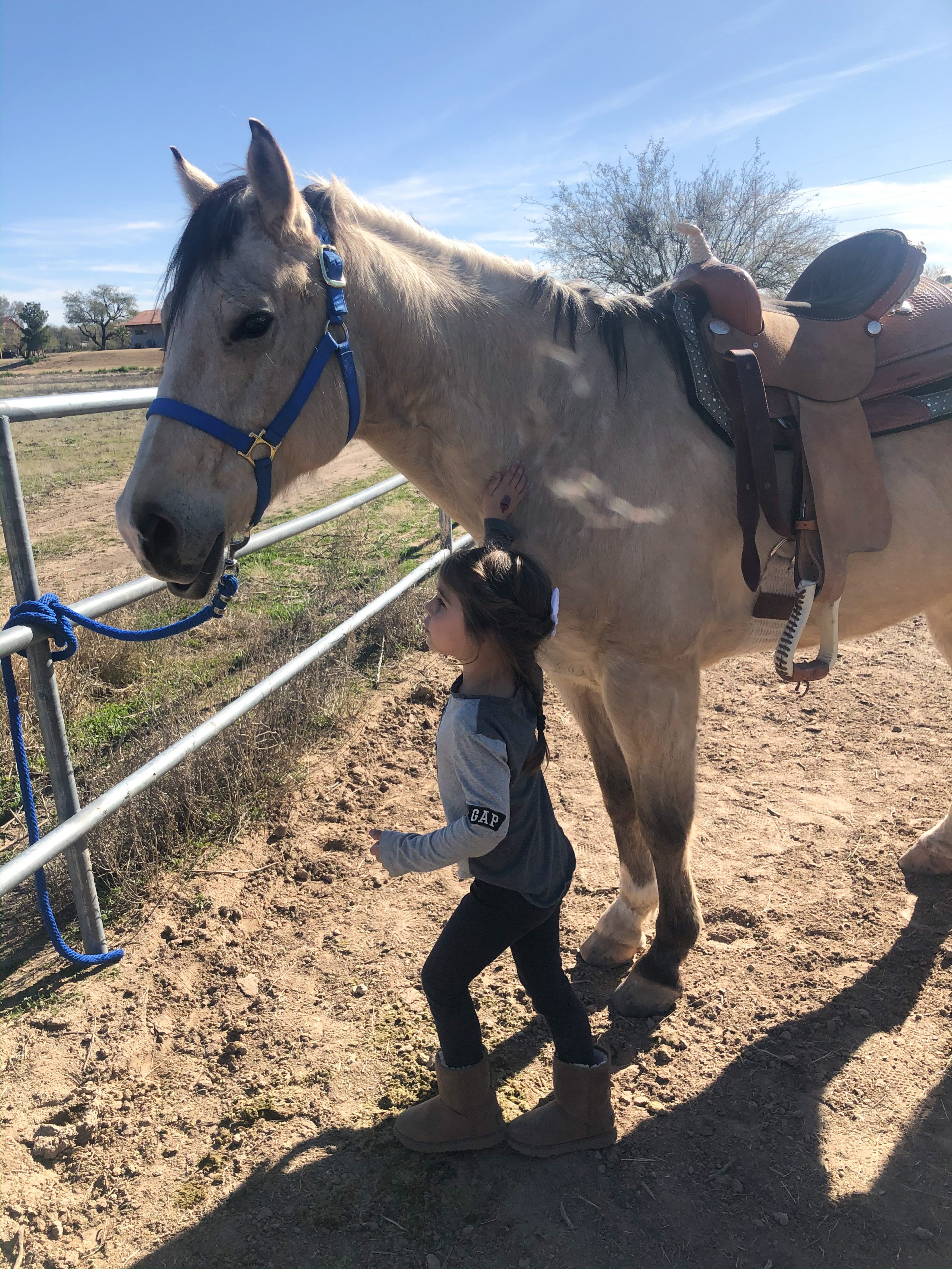 and the Pilot in a Where’s Waldo outfit, so you know it was a good one. 😉 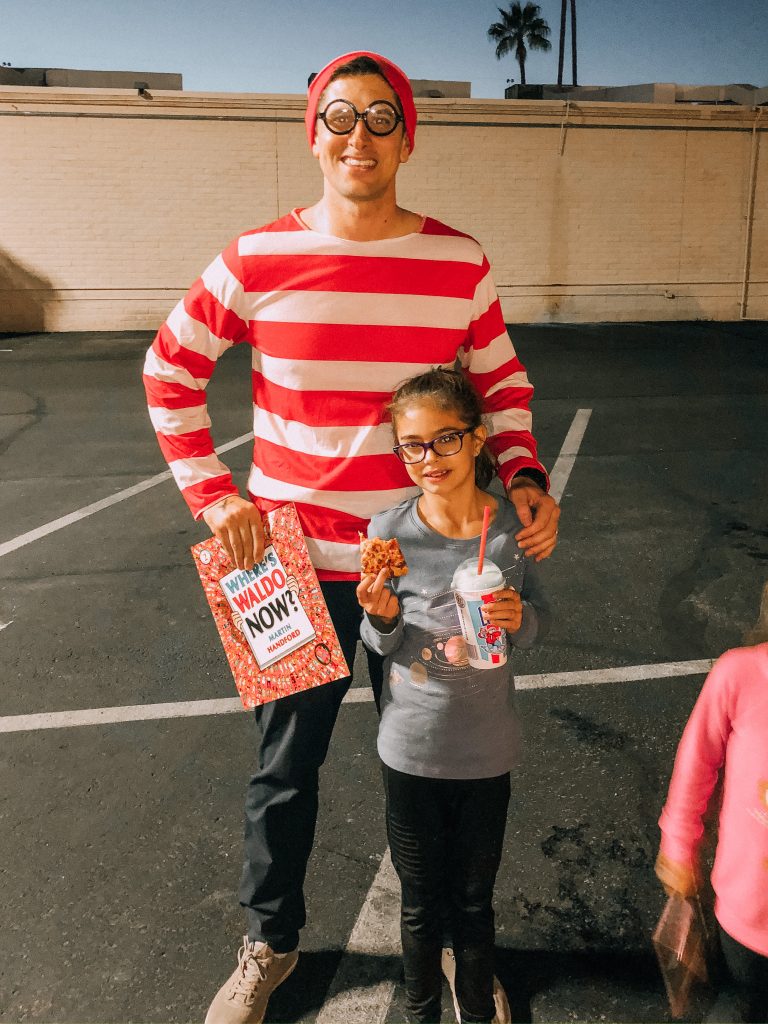 Happy Monday! How was the weekend? It was a festive one over here. We celebrated Liv’s birthday at Skate Country with all of her friends. There were 20 kids there, skating around, snacking on pizza and having the best time together. 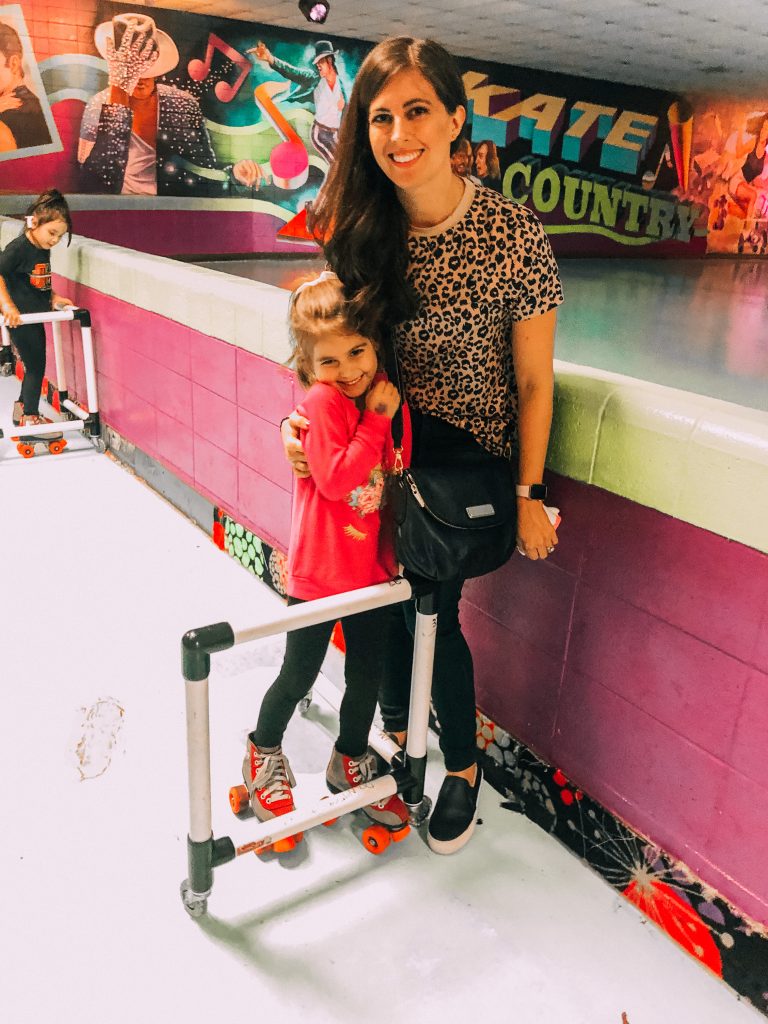 When Liv requested a Where’s Waldo party, a little part of me panicked a bit when I went to Etsy and there was NOTHING. I depend on Etsy to make up for my lack of time and craftiness – why make a horrible banner when I can pay an expert the same amount I’d waste in supply cost to do it 80 times better? – but this actually forced me to make something haha. I put together Where’s Waldo treat bags with a pack of red bags from Target, some pictures of Waldo I printed from the computer, and squiggly scissors we had on hand for some bizarre reason. 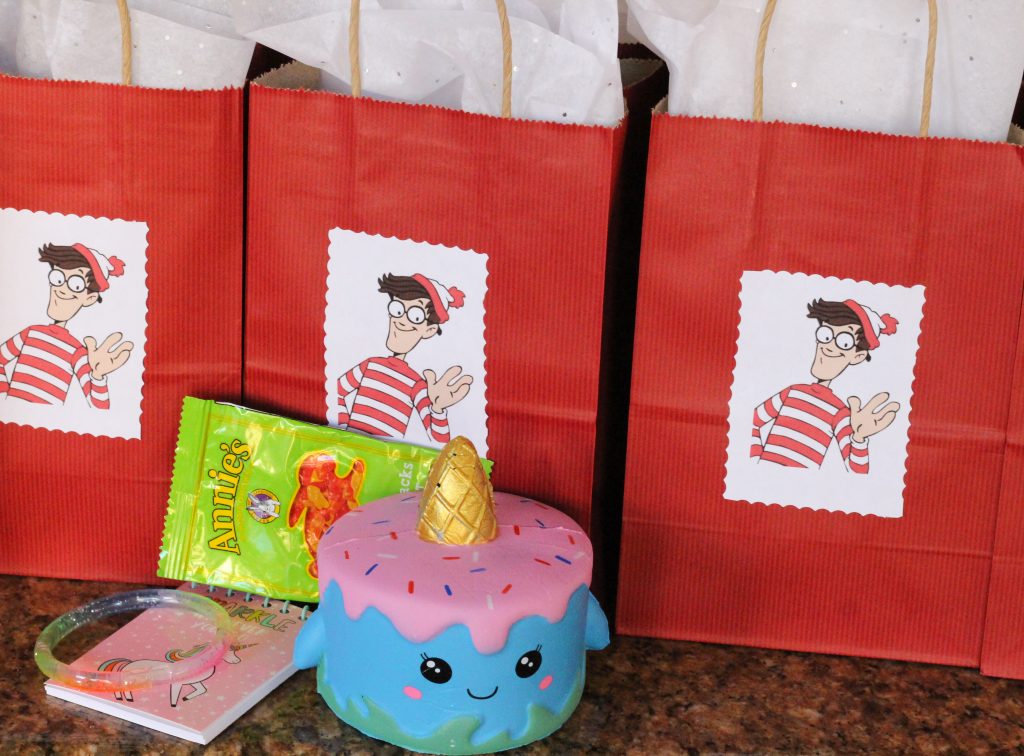 I filled each bag with a glitter bracelet, mini notebook, a large squishy toy, pack of Annie’s gummy bunnies, and each kid took home a Where’s Waldo book. 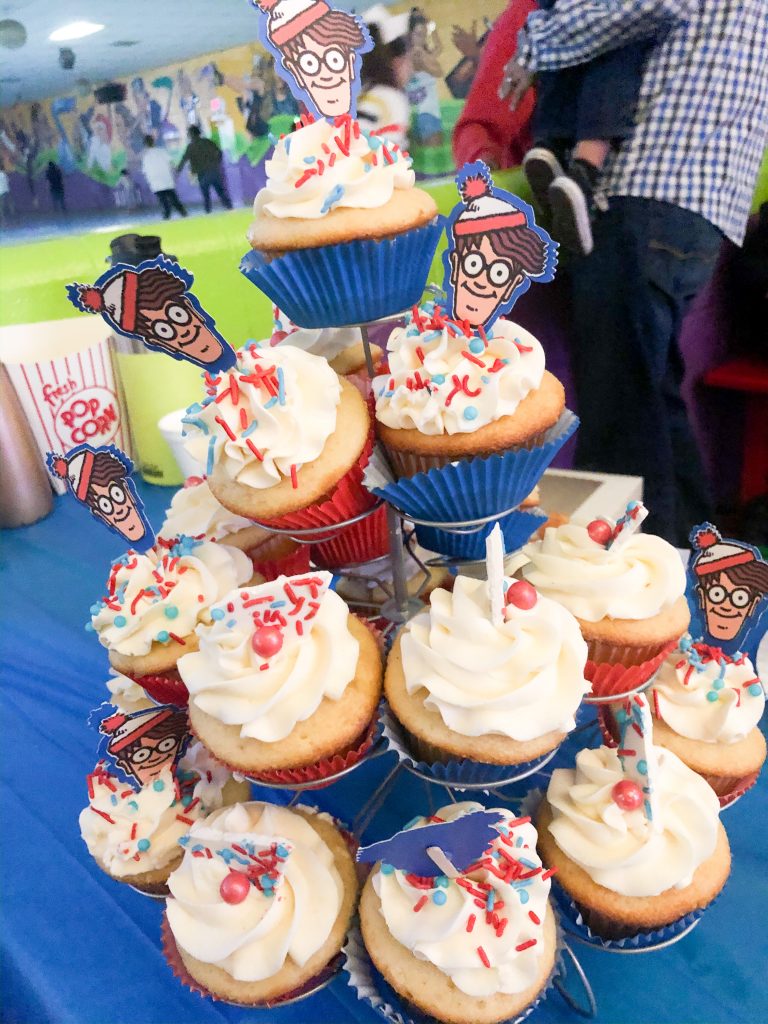 The cake and cupcakes were ordered from Cakes by Amy. She also made P’s gorgeous Frozen cake, Meg’s baby shower cake, and Livi’s Toy Story cake from last year. Tucson friends: definitely hit her up if you have any special occasions on the horizon! The crazy thing is that the cakes taste even better than they look, which seems impossible, but it’s true. 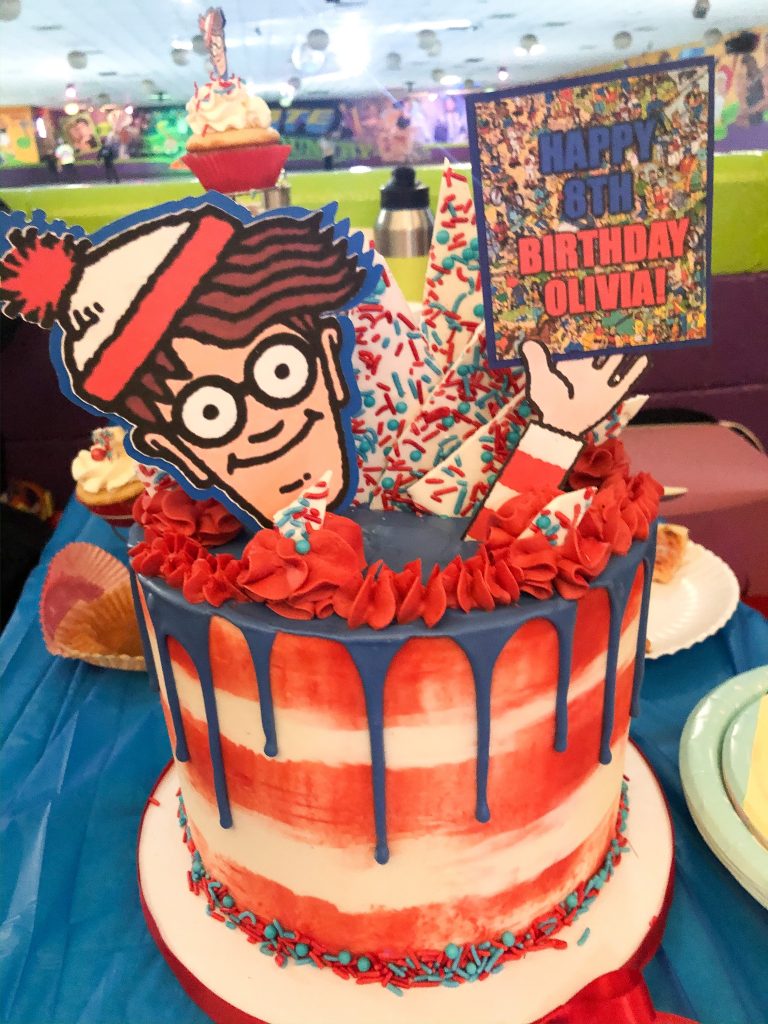 Skate Country made the party planning super easy. We ordered food and drinks directly from them (things like buckets of popcorn, pizza, mini corn dogs, etc.) and they let Liv request a birthday song from the DJ booth. (She picked “Chandelier” because she loves Sia right now.) It was a lot of fun and I loved seeing her with her beloved friends from her old school, plus the new friends she’s met this past week.

The highlight of the party was seeing the Pilot in this Where’s Waldo costume from Amazon. People thought I actually hired someone to be Waldo. Nope, that’s my husband.

The kids at Skate Country who weren’t with our party treated him like a celebrity. They all wanted high fives from Waldo. As hilarious as it was to watch him skate around with the shirt, glasses, and beanie, the best part was watching him RACE against the other adults in his costume. Kyle and I were laughing so hard I had tears running down my face.

Towards the end of the party, he “hid” in a retail section near the front, and as the kids found him, they received their treat bags and books. 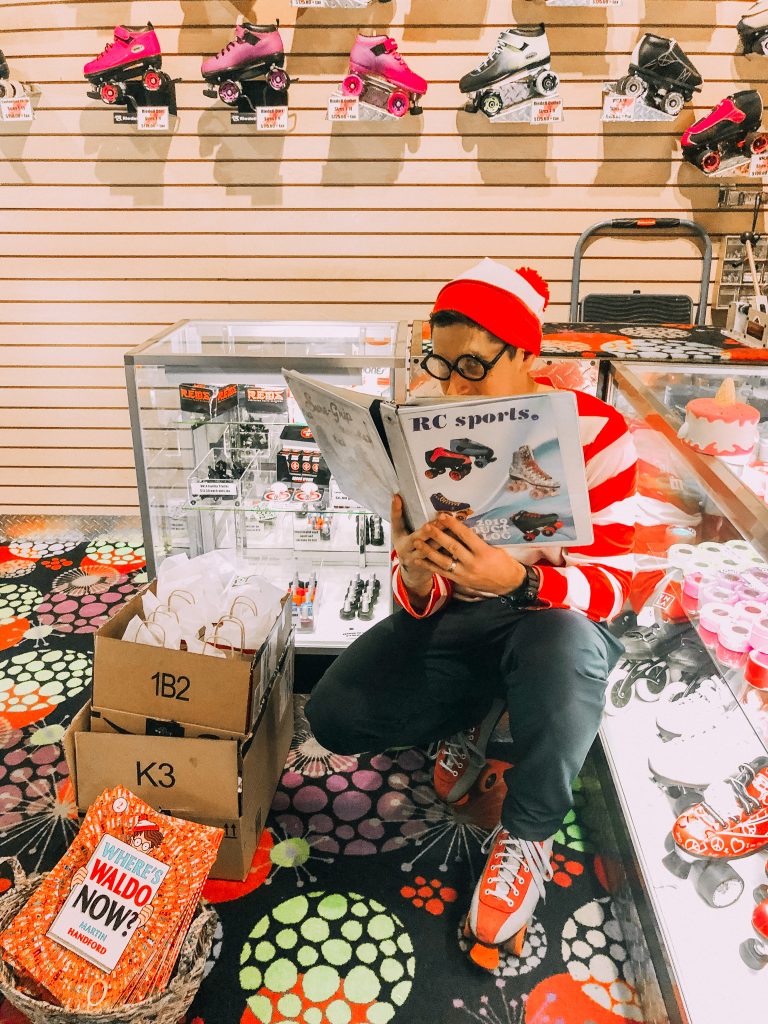 We went home, watched Liv open a mini toy store worth of gifts, ate cake out of the box (there was a tiny bit left over), and called it a night.

Sunday was an equally amazing day. We took it easy at home in our pajamas, ran to Trader Joe’s for groceries,

and later that afternoon, 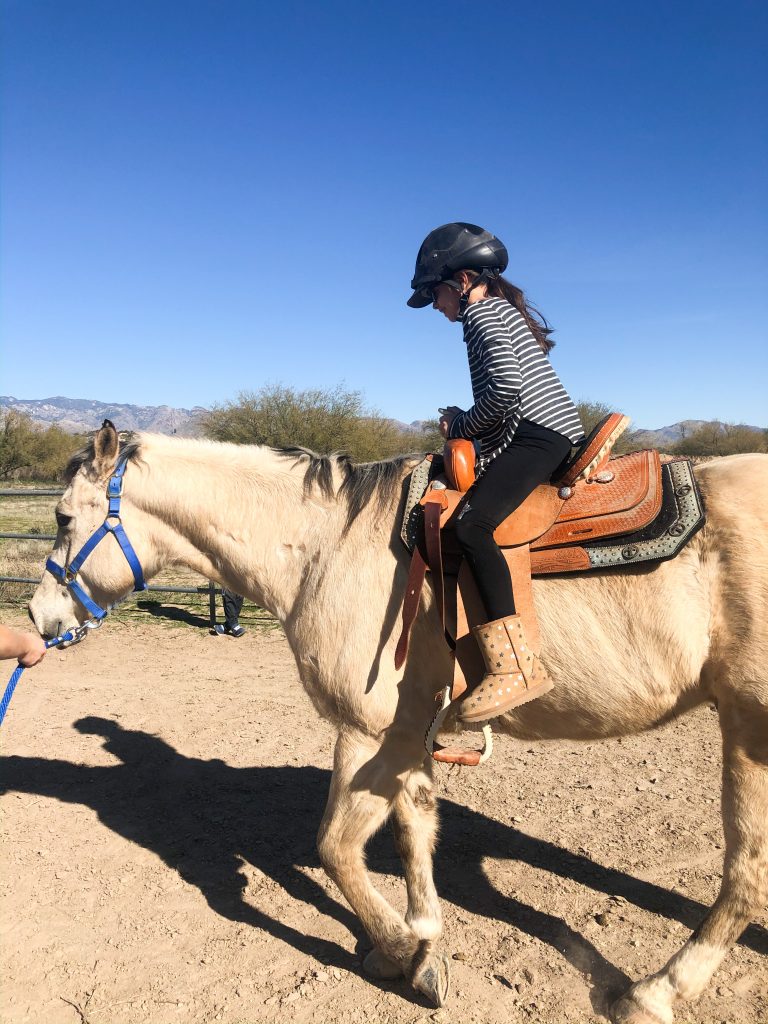 our friend Beth invited us over so the girls could ride their horses. When I told Liv and P where we were going, they both squealed with delight. We all love their horses, and will often go visit them in the barn for head pats and baby talk voices to them, but the girls had no idea they’d get to ride them one day. They were ol’ pros for sure.

Dinner was at Kyle and Meg’s. Kyle made some pork in the Instant Pot, green beans, and salad, and I brought over chicken that he mesquite grilled, butternut squash and asparagus. 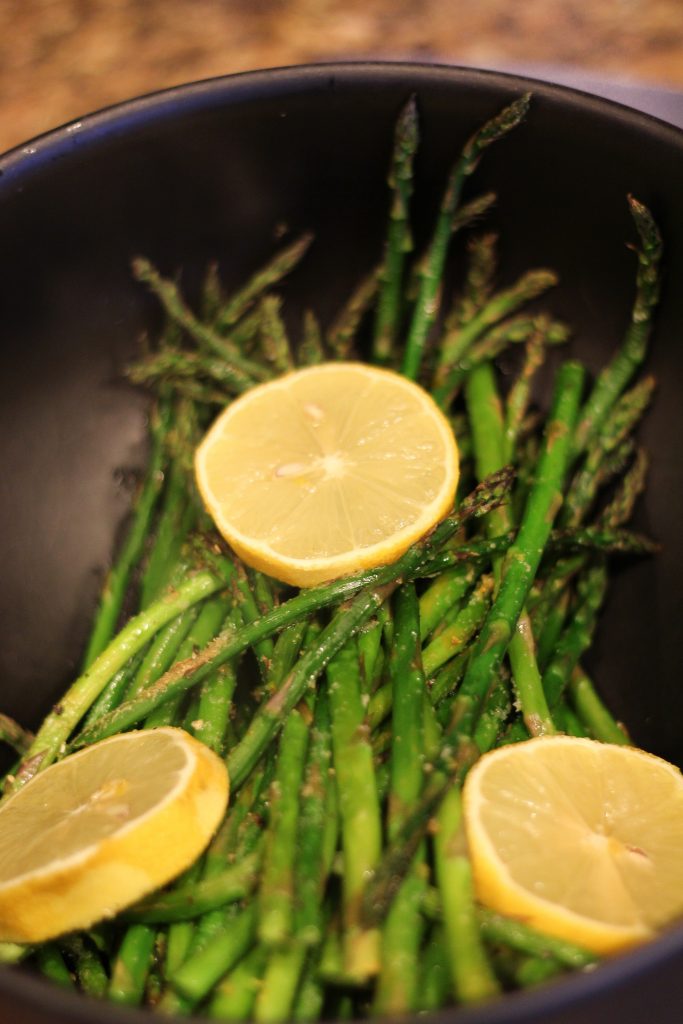 (I roast it in a little avocado oil with salt, pepper, garlic powder, lemon juice, and lemon zest.)

This morning, I’m meeting a friend for yoga and cranking through work stuff. Hands in the air if you’re excited for Bachelor tonight!!

Happy Monday and thanks for stopping by the blog today!

Posted in just for kicks, tucson and tagged party