This is something I have mixed feelings about. For one, I’m really happy to be able to eat food again, but it sucks (<— pun?) when you can’t feed your baby the way you would in an ideal world. All in all, I’m thankful that I have the resources and medical help to nourish our baby in a way that will make her feel good and thrive. I’ve learned with kiddos, though, that you can have a plan and expectations of how you’d ideally like things to go, but you also must be flexible and adapt according to baby’s needs and whatever challenges arise. If you’re not flexible, you’ll just end up frustrated 99% of the time. 😉 Those snuggly breastfeeding sessions, even in the middle of the night and I was totally zonked, are something I’ll cherish and already miss.

Last week, we had an extra tough week with the reflux. So bad that Tom stayed home from a work trip; this is something he hasn’t done in the 10 years I’ve known him. We’ve been to the pediatricians at least once -sometimes as much as 3 times- per week since P was born. At our last appointment, after a night where P cried and vomited nonstop for four hours straight, the doctor gave us a can of Elecare, which is an elemental formula. It’s hypoallergenic, and everything has been broken down to strictly amino acids. The doctor was confident that P’s reflux wasn’t structural and that it was aggravated by an allergy. Her diapers had suggested this for weeks, which is why I started to eliminate foods from my diet. First it was dairy, then eggs, then soy. I also found that she would react after I had nuts, so I started to eliminate those as well, and found myself with basically nothing left to eat. I ate a lot of very bland foods, since spices and certain veggies and fruit can affect reflux babies, too. It was hard, but I figured it was worth it if I could continue to breastfeed.

For the first time ever, despite the fact that I only have one working boob, breastfeeding was actually going well. I could feed her from the left, and we’d top her off with the Alimentum formula. She has never really done well with the Alimentum and would have the worst spitup sessions after nights of more formula. This is also when she would choke the most often, which I’ll never get used to. It scares me every.single.time. We switched her meds to Prilosec (she also takes an infant probiotic), which seemed to be helping, but from the diapers, something still wasn’t right.

The pediatrician said that I should give her the Elecare formula and strictly pump for 2 days and see how she reacted. I knew dong this would negatively affect my supply, even though it meant I could finally have a plate of scrambled eggs (my favorite food!). We decided to do it later in the week after the Prilosec had more time to kick in. If Elecare wasn’t the answer, I wanted to be able to breastfeed while we figured out the next move.

The day before we decided to make the switch, P started refusing to breastfeed. She was in so much pain, getting her to eat became a battle. She’d cry in frustration and finally drink a bottle after totally working herself up. So, we took it as a sign and I started pumping only as we switched her to Elecare. The pediatrician said if Elecare was the answer, it would make sense to stop breastfeeding since at this time, we have no idea what she’s allergic to. (They won’t run allergy tests until she’s a year old, but as of now, the ped is saying she’s MSPI. This would explain why the Alimentum bothers her. Even though it’s hypoallergenic, it’s still derived from cow’s dairy, and many MSPI babies will still react to it.) The first night we gave her the Elecare, she went to bed that night without the screaming painful spitup. We were shocked. We’ve had a couple of difficult nights since then, but on the whole, yeah. That’s all I’m saying. (I don’t wait to jinx anything.) We got a prescription, thank goodness, because a can of Elecare is $40 for a 2-3 day supply.

I’m pumping until I have nothing left, and dropping sessions each few days so I don’t get plugged ducts. Typing that makes me cry, but I’m really happy I was able to give P breastmilk until just under 8 weeks, despite our many challenges. It broke my heart to think about throwing away everything I’m pumping right now, so I’ve been donating it. Knowing that it’s going to women and babies who need the milk makes me feel less sad about having to stop breastfeeding before I was really ready. 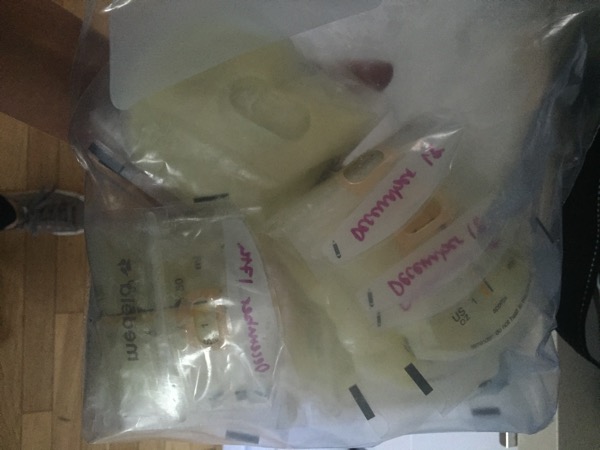 Even though I miss the breastfeeding, I’m still using the bottle feeding sessions as a time to snuggle and slow down. I’m praying that this little lady will keep feeling better and better.

Egg-Less Nog Protein Shake → ← when you let go of fear