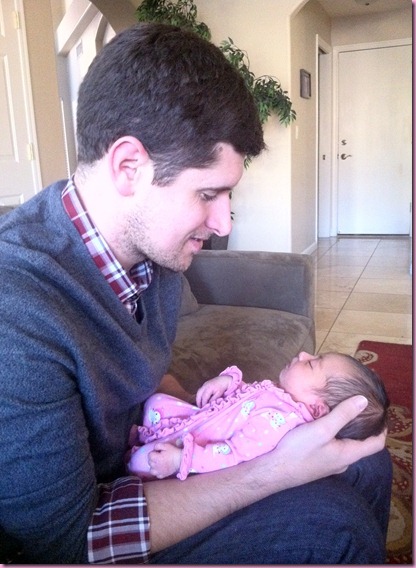 Hi everybody. I hope you guys are doing well. As you probably know, Gina’s pretty busy these days, so when I offered to write a post about my perspective on the great day o’birthing, she didn’t argue too much. Well, it was a hell of ride from where I was sitting and I wasn’t even the one on the bed. However, I can’t imagine attempting this journey without being armed with the knowledge and the team that was with us that day.

Going into this whole pregnancy thing, I had no idea what Bradley Method was or…wait. You know what? I didn’t have a clue about childbirth in general. I assumed it would be  “9” months (as opposed to the actual “10”) of people rubbing her belly; we would go to a nice restaurant, her water would break, and it’d be a mad-dash to the ER with a head and a foot popping out of her lady parts all the while she would be screaming about how much she hated me for doing this to her. I was thankful for the subtle differences of the actual event.

After 12 weeks of Bradley, I came to understand my coaching role as one that would encourage Gina to safely deliver our baby while advocating for our plan as effectively as possible. I knew I’d have the help of our awesome doula, midwives, and nurses.  My confidence was pretty high by the time Gina’s contractions were 5 minutes apart at breakfast (by the way, it felt like she’d been pregnant for so long that contractions would never come at a regular interval to start this thing). I began relying upon what we learned during our classes which allowed me to track her stages of labor and pass that to news of progress to Gina. While she labored at home, I packed our things into the car. I had to stop every few minutes to push down on her lower back during the contractions. We passed the dog off to the madre and made the cautious drive to the hospital.

A couple things surprised me when we got to TMC. First, I was surprised that her contractions didn’t slow down to much (now about 4.5 to 5 minutes apart). Secondly, I anticipated that I would have to immediately be politely aggressive about ensuring our birth plan was met. However, our nurses were completely on board. They were always looking out for our safety; but otherwise, we were allowed the liberty to do what we felt would work best (i.e. wearing pajamas instead of the hospital gown, walking around the hospital to speed up labor, intermittent fetal monitoring, etc.). With that concern all but nullified, I was free to focus on Gina.

I’ll talk about how wonderful I thought the midwives were in just a minute, but let me take this opportunity to talk about the other person that was with Gina the entire time. I couldn’t have done this without the skill and tender actions of our absolutely amazing doula, Tricia. She and I worked as a perfect team. Every time we recognized that Gina progressed to the next change, Tricia and I looked up, smiled, and shared a mental high-five before going back to motivating Gina. During each contraction, Tricia pushed down on Gina’s lower back with a warm compress, and I breathed with Gina to help her cadence while reminding her to exhale in a low moan when the pain was getting to her. I also had a small role in updating the fam via texting my Bro-in-law and occasional visits to the lobby where the Mexican nina fiesta was in full swing.

Laboring went on like that for some time as Gina moved closer and closer to transition. I knew this would be our greatest test. Gina always ensured me that, although she has a low pain tolerance regarding most things, when it came to giving birth she would dial it up and make it happen  – well, she made it happen and then some. While she was asking if she as dying or telling us that she’s quitting or leaving, Tricia and I kept telling her she was doing great and she’s going to be through it soon. Gina called up some sort of superhuman pain tolerance and fought through it. We were so happy and congratulatory when transition passed as we neared second stage labor. Of course, we had no idea that the cord was wrapped and that she had 3 more hours of hard work before the pushing began, but we toughed through that, too. It involved a lot of breath control, different laboring positions and me being a human squat bar or partner for those times she didn’t make to the bed or bathroom before another contraction hit.

The only time I felt unsure and a tad worried (except when we realized the cord was wrapped, of course) was when we were 2 1/2 hours into that last portion of labor and the baby’s heart rate wouldn’t accelerate. I chose my words very carefully when talked Gina through each painful 60 second period (often 80 seconds but I didn’t tell her that). I didn’t want to sound repetitive but I did want to make her feel like she was making progress despite feeling like she was stuck in this stage of labor. With some crucial suggestions of the midwives and nurses, we got things moving again, and before we knew it, it was time to push.

Sharon was the midwife on shift, and she went to work. Everyone there had their own unique role interacting with Gina while she pushed. From encouragement to direction – the synchronized efforts kept Gina focused. I was next to Sharon ready to “catch” Olivia on her way out. It was a surreal event to say the least. When her head was fully out and Sharon told Gina that should couldn’t stop pushing so Olivia wouldn’t be in too much distress, I elected to let the professionals work and told Sharon that she’s got the catch. I continued to tell Gina she’s doing great and to breathe deeply when she could (not that she needed it – Gina was on autopilot for the 30 seconds it took to get the rest of the baby out). I cut the cord which had to be done because Livi needed immediate attention. All that was left for me to do as a coach was to keep Gina updated while the nurses were getting Olivia’s heart rate regulated.

I’ve always been proud of my hard-working wife, but after witnessing what she did to bring little Olivia into the world, I have a new hero. She showed so much strength – I’m inspired beyond words and often bring up the fact that I can’t believe she did so well. We would be just as happy to be parents if she was delivered any other way, but it was nice to see something worked out to plan. Now the adventure’s really getting started, and I can’t wait to see what the future holds for our family. Hope you enjoyed reading this. We’ll see you soon. 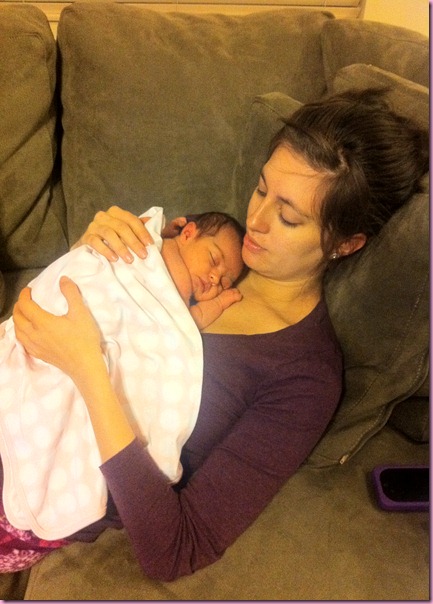 Posted in family, The First Year and tagged family