I’ve been promising a “before” pic of myself for quite some time, but since the madre’s been holding them hostage (and never believed I was overweight to begin with) so that’s where the hold-up has been.

I came across this picture while cleaning the closet out last weekend: 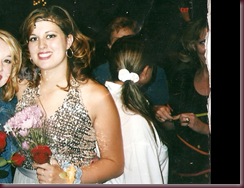 That’s me, senior year of high school after our last performance of Footloose: The Musical.

I grew up eating Mexican food to my heart’s delight and had danced since I was three. I danced for 3-4 hours each day, but my body was used to it and I paired it with unhealthy eating. Fresh fruits and veggies were rare, while tacos and enchiladas were plentiful..and delicious. I remember the summer before this picture was taken, I sat in the bed of my friend’s truck with a couple of other girls and we shared an entire Baskin Robbins ice cream cake. And I thought nothing of it.

It was the summer after that picture was taken that I decided to make some changes.

The thing is no one made me feel like I was overweight, unhealthy or unattractive. I had a great group of friends in high school –was even homecoming princess despite the stereotypical requirements associated with that title—and my family never said anything to make me feel badly about how I looked. I felt uncomfortable in my own skin and wanted to feel better about myself. I was tired of feeling lethargic at dance class, hating my arms (I rarely wore tank tops), and having less than stellar skin. I decided to change the way I ate to see if it made me feel better.

Major dilemma: I had no idea how to eat. I didn’’t know what a smart carb was, lean protein, healthy fat, nada. So I made the mistake of trying as many diets as possible in succession.

Diet #1: Slim Fast. Nuff said. I was irritable, starving and grossed out by the shakes so that ended pretty soon after it started.

Diet #2: Aktins. No carbs on an intense dance schedule did not work out as I was even more tired and felt disgusting living off of meats and cheese. Even though I didn’t know much about nutrition, I had a feeling that living without carbs couldn’t be healthy

Diet #3: Weight Watchers. Counting was a PAIN and I could still eat whatever I wanted—that’s what I was trying to get away from.. I wanted to make healthier choices instead of eating anything I felt like. Also, I gained back so many points from dance class anyway, so this plan was pretty ineffective.

The magic plan: South Beach. I started South Beach freshman year of college and it worked like a charm. I didn’t have to count calories (just watch my portions) and it taught me how to eat. I learned about the importance of choosing smart carbs (whole grains), lean protein (fish, chicken, eggs, deli meat) and healthy fats (low-fat or fat free dairy, nuts, olive oil, avocados, fish). I followed this plan for a year and lost the majority of my weight through South Beach.

After starting South Beach, I wondered what would happen if I changed my exercise habits, so I started walking every day before dance. It started out small (15 minutes) and I gradually increased it to 30-45 minutes. Walking turned into running and I also started to tinker around with the weights. I did a lot of circuit training and was so excited to feel my body toning up as I lost the weight.

While the physical benefits of exercise and eating well are obvious, it’s amazing what they can do for you mentally. In school, I was much more focused and awake during class and was able to maintain my honors status and scholarships, and I became a better dancer and dance instructor.

I still follow a quasi South Beach style of eating to this day—I load up on fruits and veggies, healthy carbs (I do not eat white rice or bread), lean protein, and healthy fats as recommended per South Beach standards. However, I’ve made the gradual change from allowing chemicals in my food to eating more whole foods. Now I strive to eat food in its most pure form as much as possible.

This is me now: 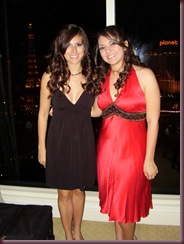 (and my cousin Steph)

Am I happier? Not necessarily. I’ve always been a pretty happy kid.

Am I more confident? I guess.. I can wear tank tops now if that counts 😉

Am I healthier? Most definitely.

Not to be cliché, but what we look like on the outside doesn’t matter. You can be a hottie tottie, with a nasty-looking set of organs from mistreating your body, or you can be at a happy, healthy place and glowing from the inside out (thanks for the phrase Miss Julz).

Vita Mix, how did I live without you for so long??? → ← Green chile egg casserole