My mom and nana hadn’t even been here for 24 hours before they had potty-trained our child. It was like it was no big deal, and right before my eyes, she went from a baby in diapers to a KID who will tell me she needs to go potty, go, and then ask for jelly beans. I’m still in shock.

For quite a while, we’ve been casually approaching the potty training thing. I figured when she was ready it would happen, I bought her a cool potty seat with princesses on it, and some organic jelly beans from Whole Foods (chocolate chips and natural mini marshmallows work well, too). We would ask her occasionally if she wanted to sit on the potty, and afterwards, she got one treat for trying and three if she went. (Pre-kid I would have scoffed at the idea of using treats for potty training. Now I know that it totally works. )

Apparently we weren’t consistent enough about it. I had read things about the 3-day method online, and to be honest, the thought of her running around the house naked with the ability to erm, relieve herself on the rugs made me break into hives. So I decided not to roll with that method, keep it fun and casual, and trust that Liv would tell me when she was ready to really start potty training.

I didn’t have to.

Because, the nanas aka potty wizards swooped in and made it happen. It just one day! 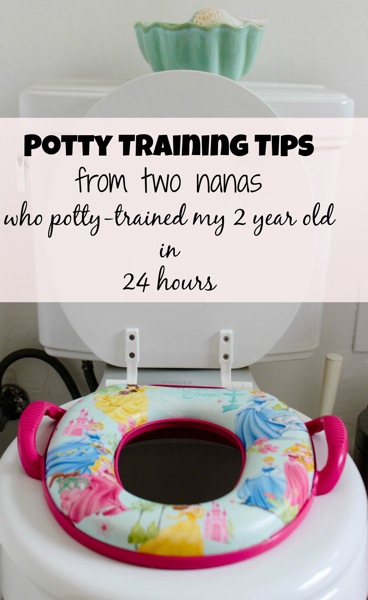 My nana handed Livi a small wrapped package and when she opened the pack of Minnie Mouse panties, she was ecstatic. She handed them to me and asked me to wash them so she could wear them 🙂

After they were clean (plus some more cute ones that the nanas got her at Target), we’ve been diaper-free ever since (except for nap and bedtime). We’ve even gone on outings and knock on wood, no probs at all. It’s pretty amazing!

Here are the potty-training tips from my mom and nana since they’ve been through the wringer (seven kids between the two of them + six grandkids).

Set up a routine. Take them to the potty first thing when they wake up to start the day. They’ll also need to be asked during meals since their little digestive system starts working, mid-morning, before and after nap, mid afternoon and before bed.

Ask them ALL the time if they have to go potty and give them the opportunity to go. The first day, I’m sure this is why we had no accidents because they may have asked her a thousand times if she needed to go potty. Consistency makes a huge difference.

Commit. Once they’re occasionally going in the potty, give them chance to go in the morning and put them in underwear the rest of the day (except for naptime). Ask them all the time if they need to go, give them lots of liquids, and give them the opportunity to go often throughout the day.

When they’re successful, make it a huge party. I may or may not do the most ridiculous potty dance when we have success. I’m already embarrassed typing this post so I might as well put it all out there.

When it doesn’t happen, no big deal. You try again later. My mom said today that we need to get a little timer so that if the timer goes off and she hasn’t gone yet, we’ll just try again later. She’s already noticed that it can be a huge delay tactic.

Keep an extra set of clothes and a ziploc bag in the car, just in case. If they have an accident, don’t make them feel badly about it. Just tell them “pee pee goes in the potty” and leave it at that 😉

Things We Did to Help Potty Training Along

Don’t force it. We kept things lighthearted and fun, and never made it feel like it was something she HAD to do. We gave her lots of praise when she wanted to give it a whirl.

Get a potty seat they like. We also have this Baby Bjorn one, but the princess one really got the ball rolling. They also have the little potties that are more convenient for the kids to get to, but I didn’t want something extra to sanitize throughout the day.

It’s been an exciting week over here 🙂 Mamas: any tips or tricks that worked well for you? Please share in the comments! I’ve found that just like switching to her big girl bed, it wasn’t as big of a deal as I thought it would be. But then again, the nanas took care of this one 🙂