Hey guys! Hope you’ve had a great day! I just got back from seeing The Proposal with Jeni and Ashley and it was wonderful. I usually don’t laugh out loud during movies and I was giggling the whole time. It was muy bueno 😉

I spent a majority of the day in cleaning machine mode. I did a bunch of nit-picky little things that make the casa feel soooo good, like polishing the granite and stainless steel stuff, taking everything off the countertops and cleaning, doing the microwave, and usual stuff like dusting, vacuuming, etc. After all of that biznass, I went to the pool to chill and read for a while 🙂

When I got back in, I was ready for lonchi so I made the pasta version of Natalia Rose’s Suddenly St. Tropez salad 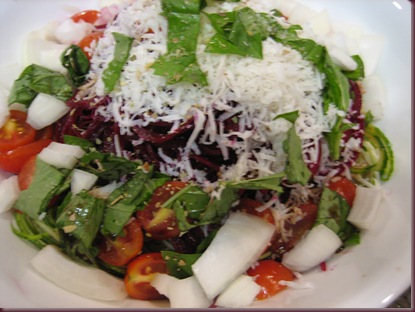 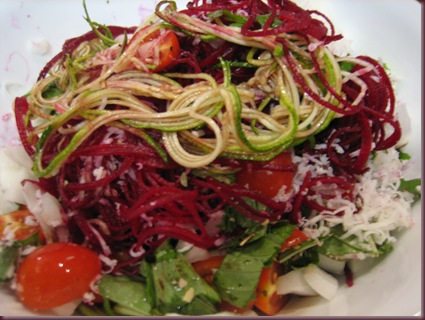 It was pretty glorious, to say the least!

Atfer lonchi, I met Jeni at the gym to do Day 6 of this week’s Shape Up plan. My legs were sore from teaching yesterday, so I gave them a day off and did biceps and triceps.

Came back to the casa and checked on the babies, got ready and met the girls at Pita Pit for dinner. 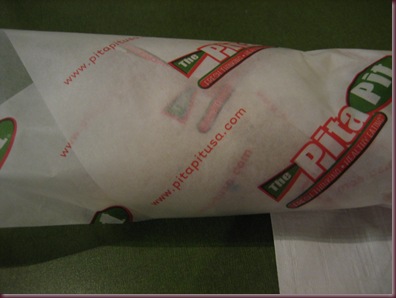 I got the usual hummus pita on wheat with romaine, tomatoes, onions, olives, cucumber, jalapenos, mushrooms and hot sauce 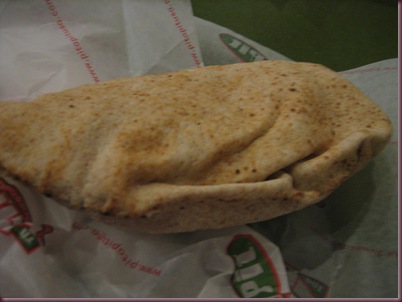 Rocked my face off. I love me some Pita Pit!

After the ‘pit’, we went went to the movie (which I highly recommend.. it reminded me a lot of How to Lose a Guy in 10 Days, which is one of my favorites) and then Jeni and I hit up Marble Slab.

I did something I haven’t done in probably 5 years. 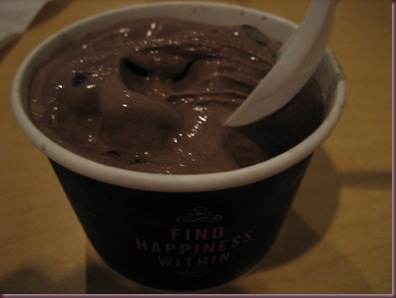 That’s REAL ice cream right there—not nonfat, not frozen yogurt, the real thing. Since I lost the majority of my weight, I’ve always had the froyo or nonfat yogurt. I’d take bites of the pilot’s real ice cream, but would never get one for myself because it reminded me of the days when I was 40 lbs heavier and would eat regular ice cream like it was my job. No joke, I hit up DQ a few times each week. So for me, real ice cream = me being at my previous weight and feeling lethargic and self conscious.

You guys know that once a week I have a “treat meal” where I’ll eat food that I normally would not want to eat. For that meal, anything is fair game but ice cream has always been a different story for me because I used to have it so often. I’ve never seen a big deal with having real ice cream, but chose not to because it’s something that I did quite often when I was at an uncomfortable stage in my life. So I’ve stuck with the froyo and nonfat stuff over the past handful of years.

Tonight, I figured I could try having a smaller REAL ice cream instead of the large frozen yogurt, like I normally would. The satisfaction difference was remarkable. The real ice cream was super creamy (and chocolaty!) and I felt more content after my kid’s size than I would have felt with the large frozen yogurt. I don’t want you guys to get the wrong idea about what I’m trying to say (and start the anonymous comments flowing), because I never told myself I “couldn’t” have the real ice cream—I just didn’t want to eat it. Tonight, I wanted the real ice cream. So I ate it, and I liked it. A lot. That is all 😀

Well it’s time for me to hang out with the pilot since it’s a rare occasion that we’re home at the same time—he’s been working a ton this week.

Hope you all have a wonderful night and I’ll see ya in the morning!

Something to do: Meet me back here tomorrow morning for a AMAZING GIVEAWAY!!! Get excited, it’s a good one 😉

Posted in dessert, Dinner, lunch, raw, snack, something to do, summer shape up, workout

My hero, the pilot → ← A gorgeous giveaway