Remember when I wrote this post about “what to do when your significant other isn’t into fitness?” Welp, the Pilot’s kind F-U was to turn around and run a marathon. I tip my hat to you, sir.

Check out his recap below! 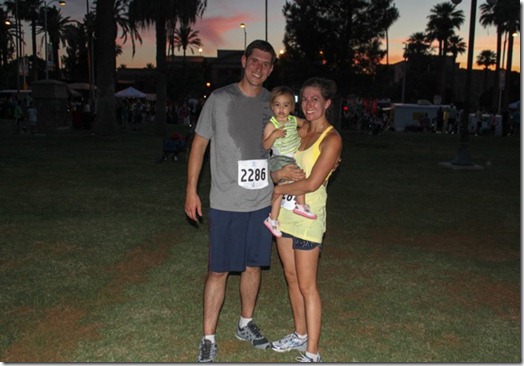 (Pic from our first family 5k)

Hey, folks – Pilot here. I hope your Holidays have been good. Gina mentioned that a few commenters were interested in post about my marathon. Fortunately, there are plenty of commercials during the Rose Bowl, so here we go.

This marathon was interesting in that I hadn’t been on a consistent running routine prior to beginning the training plan. It’s amazing how life changes in the 10 years after college. Growing up, I competed in running sports from the beginning of junior high through high school (track, soccer, etc.).  I also ran fairly often while at Bama thanks to like-minded friends in AFROTC. In fact, I ran my first long-distance races in college. I was averaging 12-minutes on my 2- mile runs, but I wanted to push it up from there. We started doing mud run-type races, 5 and 10ks on campus, and finally, a few marathons.

One of the two that stood out was the Bataan Memorial Death March Marathon. If you’re not familiar with the forced march by US prisoners of war under the Japanese during WWII, read up. You’ll take every bit of pride from any race you’ve run and trash it.  The starving POWs covered approximately 80 miles and along the way, there was a little more adversity than not having their favorite Gatorade at the water stations. Our five-man team ran (read: shuffled) in full military clothing (minus the outer which we could remove) with 35lbs packs (not including water).  We trained for months in locations all over central Alabama. While ensuring the five of us finished at the same time, we took just over 10 hours to complete the 26.2 miles. The most memorable part of the race was running the steep hill into the mountains near White Sands, NM. Actual survivors of the march from WWII were there to cheer us on. Other than to shake their hands, no participants dared to slow down while shuffling past the veterans. 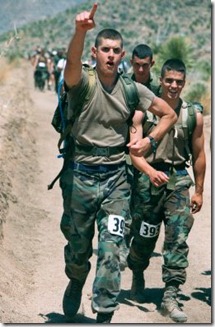 I saw a camera guy and this happened. I don’t know.

The other memorable marathon was much less dramatic, but it stands out because, like the one I just ran here in Tucson, I ran it with less than optimal training time. Actually, I only trained for it for three weeks. See, after Bataan, my running tapered off significantly. I still ran a couple times a week on average, but my focus was on graduating and keeping up with ROTC stuff as cadet wing commander. Well, during this time my “friends” coerced me into running the Blue Angel Marathon in Pensacola about a month prior to the race. God knows why I agreed, but I did and jumped in on their program. Again, I was in decent shape, so the race wasn’t actually that bad…until mile 22 anyway. I remember my legs hurting. I even jogged backwards for a little bit because that’s the only thing that relieved the pressure. However, after this minor hurdle, I pressed on to complete the race. I finished around 4:05.

Fast forward to now and the running’s tapered off a lot more. Now, I’m a “sure, let’s go for an 8-miler” or “oh, there’s a 5k this weekend” type of guy. Work and family stuff tends to fill most of my time. I won’t use the excuse that I’m older, because I’ve got some 40 year-old friends that kick my butt on runs. So, when one of those 40 year-olds and a couple other dudes in the squadron asked me (constantly) to do this last race, my ego didn’t let me back out. Are you seeing a trend?

I started the training program about a month late (jumping in when the rest of the crew was at about 10 miles). I was not ready. I convinced myself that I’d run with them and just sign up for the half if I wasn’t feeling it. So, I slugged it out through the plan and distance runs: 12, 14, 16, 18…20 (that one sucked…only made it to 18 before my legs cramped up forcing me to hobble to the finish), 20 again which went much better, and the taper down. There were a couple easy weeks in there, too. Anyway, I made it that far… I should just go for the 26.2, right? By the way, for the long training runs I: ate a banana on the drive to the start, ran with a camel back, ate a goo or block every 45 minutes, and ate a banana at the 13 mile point. I also popped a couple Advil for the 18 and longer milers (did the same for the race).

All of our training runs were in moderate Tucson winter temps: the average was about 55 degrees on the Sunday morning long runs. So, of course, race day was in the low 30’s with rain. My “toss-away” sweat shirt and running pants would be worn for the majority of the race. I was still pumped to do it, but let me tell you, it sucked – like, bad. I made it to 13 in around 2 hours, so I felt okay. Somewhere around 17-20 miles the weird emotional stuff hit me. Distance runners might know what I’m talking about. If there’s anything in your life that could get to you a little (family, something you’re going through, etc.), it could affect you during the race. For some reason, I just started thinking about Livi at the finish line as motivation, and I suddenly caught myself fighting back a few tears. Yeah, I don’t know. It was weird. That all faded as I entered the 20’s and so did any lingering feelings of fun. Somewhere in the late teens, I had started walking from the marathon mile-markers to the half-marathon markers (approximately .1 miles).Well,  right after the half-marathon marker on my mile 23, there was a hill that I was pretty sure I could jog up and press past. It turns out it wasn’t a hill; it was an IMMOVABLE WALL OF GOD and I hit it hard. The last three miles were sheer misery as I watched the pace for 4:15 finish (the goal) slip to 4:30 and even that slipped a little more. Whenever I tried to get running again, my legs just weren’t having it. It reminded me of the first 20 miler. I crossed the finish line in 4:48. I guess sometimes, you just have a sub-par run. Oh well. I finished and put another 26.2 in the books. 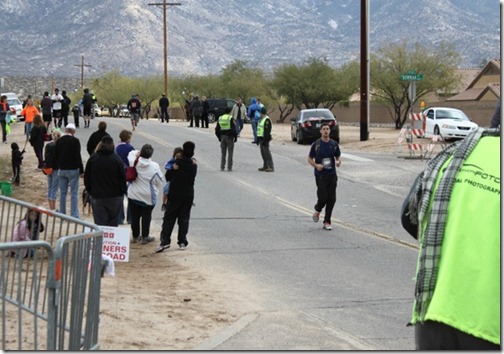 I’m glad I did it, but I probably won’t jump in so late on a training plan again. I’m signed up to do the Phoenix Half in March as a nice break. Maybe I’ll see some of you AZ runners up there?

Anybody else have a rough experience hitting the wall and what did you do to convince yourself to press on? Anyone run their first distance run recently? Congrats in advance. 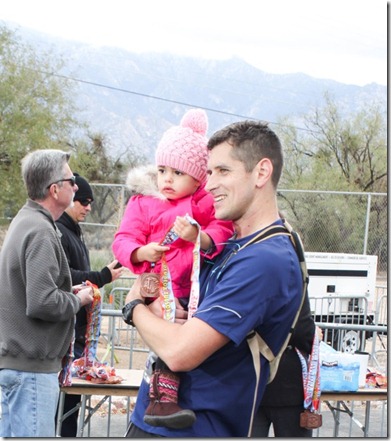 Posted in guest post, pilot review, races, something to talk about