Hi friends 😀 How are you? Hope you’re having a fabulous morning.

The topics we chose for this video:

-Do we do a joint bank account or separate?

-The Pilot’s tips for someone about to start pilot training

-How I decide what to blog and what not to blog

-Food we couldn’t live without

-Who hogs the covers 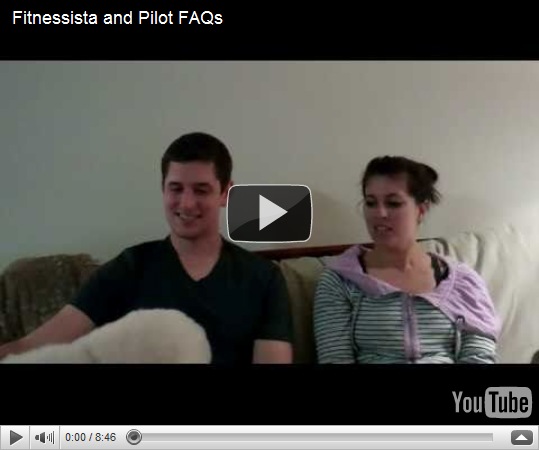 It would seem counterintuitive, because my Pilot eats enough for a family of 4, but I’m MORE motivated the workout and eat well when he’s home. Remember the whole “feeling like a nun” think I mentioned while he’s away? Well since I don’t have to worry about that when he’s home, it makes me want to eat better and workout ;)

I don’t have a *regular* workout routine- I think that’s what causes boredom to set in (I get bored so easily!) and keeps me from getting stuck in a rut. Sunday is pretty much my planning day- I’ll plan out my workout schedule for the week, meals for the week (just dinner ideas + a few lunches, bfasts are pretty standard over here), and tentative blog ideas for the week.

As far as the workout thang goes, I almost always dance at least 5x per week. I’ll combine in some weights (or Bodyrock) and yoga according to what my schedule is like. I’ve found that weights/Bodyrock dance and yoga is a great mix for me right now 🙂

I really do believe that living a vegan lifestyle is the best thing one can do for the planet. However, it can be very, very difficult for some people to get the nutrients they need on a vegan diet. I’m one of those people. My body doesn’t thrive on a totally vegan diet, but does extremely well on a high plant-based diet with a sprinkle of goat cheese, fish, eggs and very occasional chicken thrown in. [You can read more about why I decided to bring chicken back *here*]

I figure that since I choose not to be a full-time vegan, by eating vegan-ish sometimes,and using my shopping cart as my voting ballot –if there’s a certified organic option, I always buy that over conventional- that’s my way of helping the planet and my body.

Pilot: I don’t mind at all. It really doesn’t affect me because she usually makes a “pilot” version of the food she’s eating (i.e. adding chicken or other organic meats to the meal). Other than that, I don’t mind eating meatless now and then because a lot of those foods are so healthy and I’m pretty open to new foods.

I’m so sorry to hear that you were in a similar situation. Mine was pretty traumatizing, and it took me probably a year after dating the Pilot until I was “normal” again. My self esteem was so messed up, and when I first started seeing the Pilot, I put up a lot of walls. I was so afraid of getting hurt again, and thought for sure that he was “too nice.” I kept waiting for him to go pyschopath like my previous boyfriend, but it obviously never happened 😉

I think my biggest piece of advice is to be patient with yourself. I also really wish I would have practiced yoga at that time in my life because I think it would have helped me. The Pilot is the kindest, most patient person I’ve ever met, so he was extra sweet and patient with me which helped my fear of commitment to melt away, until I became myself again.

Just be confident that there’s someone out there that will make you feel like a queen, and help you get through and forget the hurt you’ve been through <3

No. Hahaha. I’ve begged, but I think the most I’ll get out of him is “spectator.”

Well we’re off to meet with the realtor! See ya later today 🙂

Something to talk about:

-Food you can’t live without

-Do you -or would you choose to, if you’re not attached- roll with joint or separate bank accounts?

-How many kids do you want?