(on a Wednesday! Punctuality always feels a little strange.)

Hi friends! How’s the day going? Hope you’re having a wonderful morning. Today I’m blasting through work stuff and taking the girls to the pool. It’s supposed to be in the 90s today?! I’m sending sunshine to all of my blizzard friends — I hope you’re staying safe out there.

I’ve had a lot of requests lately to post a day of eats. I love to get healthy meal ideas from as many sources as possible, so I hope I can share something here you might want to use. (Dinner was a HOMERUN.) My meals have been a little on the (extra) boring side, with the exception of dinners (yay Sunbasket) and restaurants, but I’ve done a better job of fueling myself throughout the day. I never understood forgetting to eat (like how could you forget to eat?! Eating is EVERYTHING) until I became a mom. Then, it all made sense.

7:30am: I take my supplements while making the girls their breakfast. Since the Pilot had to work later, he could go in a little bit later, so he dropped Liv off at camp and I blitzed over to barre3 for an early class. 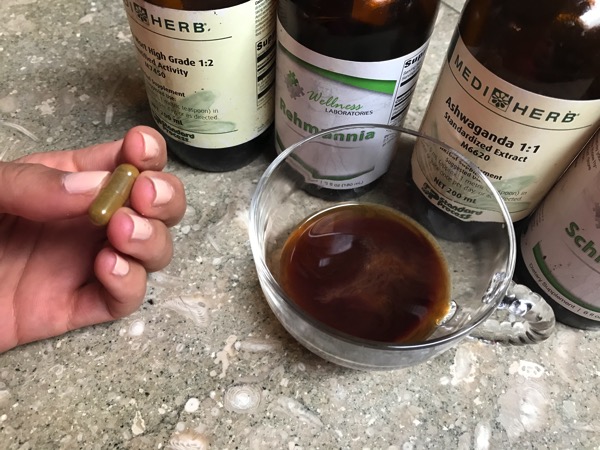 Doesn’t that mixture look tasty?? Spoiler: it tastes like death and sadness. 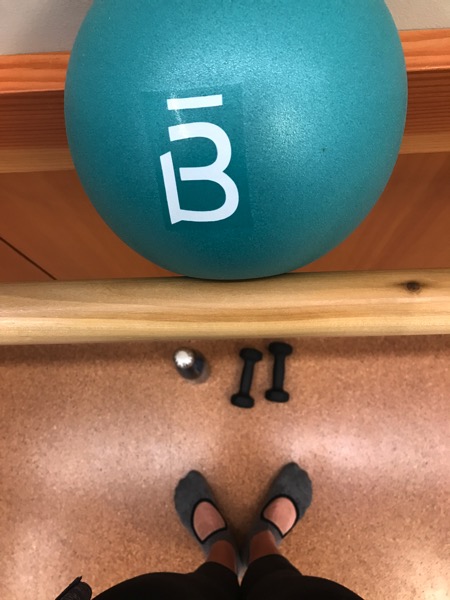 barre3 was so so so good. My legs were insanely sore after our hotel workout on Sunday, so it felt great to shake them out and move. I’m definitely taking today off, though.

10am: Half a chocolate donut and a black coffee from Dunkin’ Donuts. 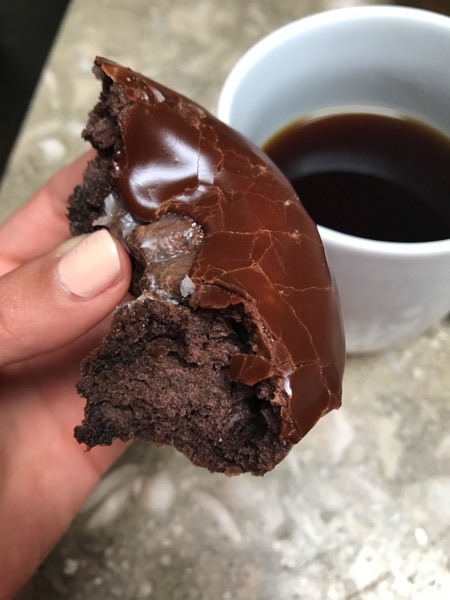 The Pilot stopped at Dunkin’ on his way home from camp drop off, and picked up some goodies. I rarely eat sugary foods anymore, but LOVE a chocolate donut every now and again. I eat half of it and chug my coffee while playing with P on the playroom floor.

11am: The rest of breakfast! 2 eggs + 2 egg whites during P’s naptime. This was my second attempt at making them because I completely burned the first batch in the cast iron (oops) and also cracked an egg onto the floor. #fail 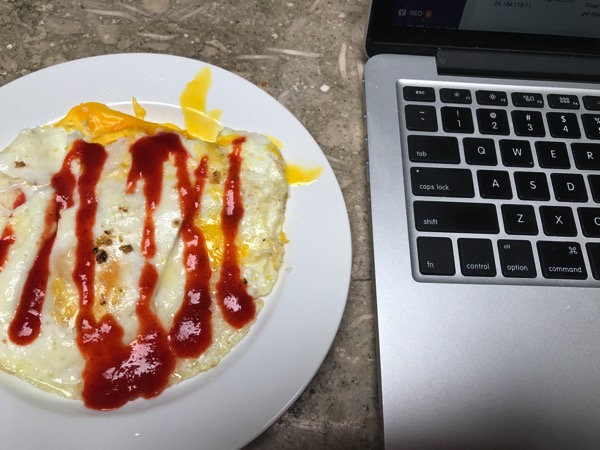 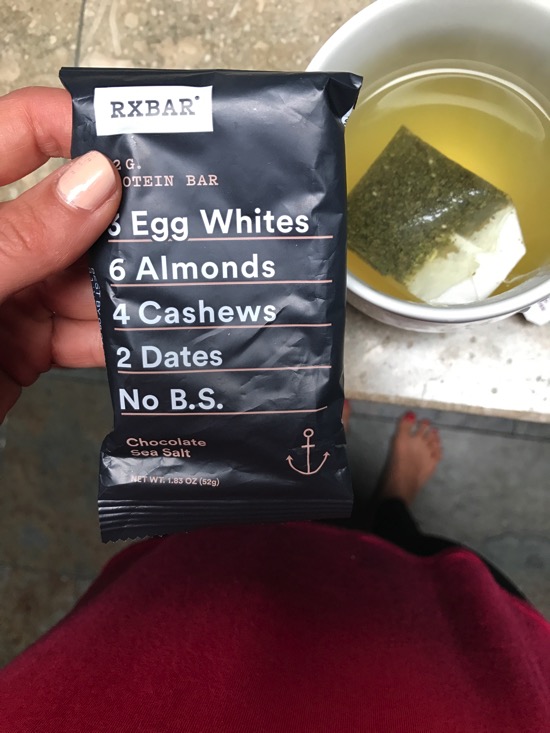 3pm: We’re back from camp pick-up, and I make my lunch: two small sweet potatoes (already prepped) with leftover chopped chicken thighs, Primal Kitchen Ranch dressing, and romaine. P picks at my salad, and the funny thing is that she loves the romaine with Ranch more than the chicken and sweet potato. She keeps going after the green crunchy bites. 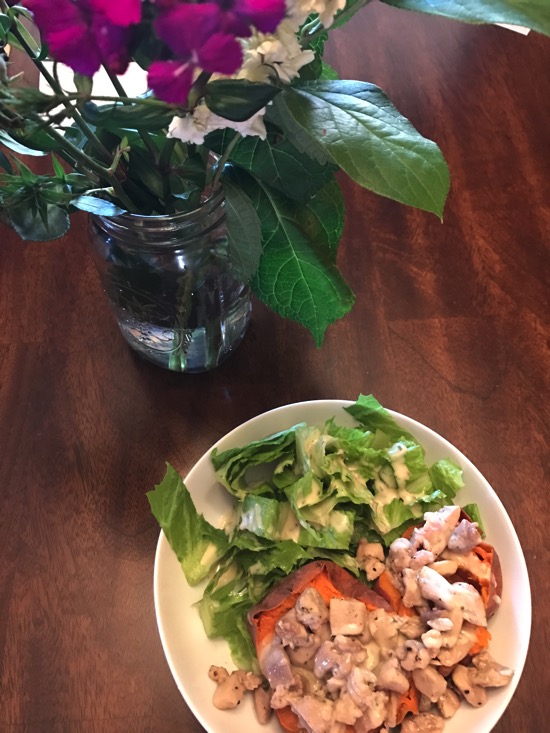 4:45 Sharing blueberries with P during Liv’s gymnastics class. I was still pretty full from lunch, but P thinks shoving berries into my mouth is hilarious and belly-laughs the whole time. 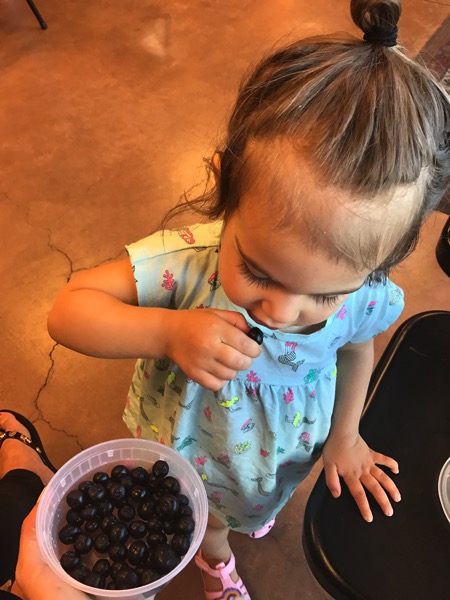 6:00pm: Dinner! The Pilot was working late, so I did the dinner and bedtime routines solo. I knew I needed something I could make with minimal active work -Liv plays while I cook, but I have to keep both eyes on P as she empties kitchen drawers and tries to jump on the couch- so I did sushi roll-inspired bowls. These were a favorite so long ago, and I forgot about them until I recently saw them pop up on Pinterest. It was maybe 5 minutes of active work: season salmon, boil rice, chop, serve.

I seasoned salmon with salt, pepper and olive oil, 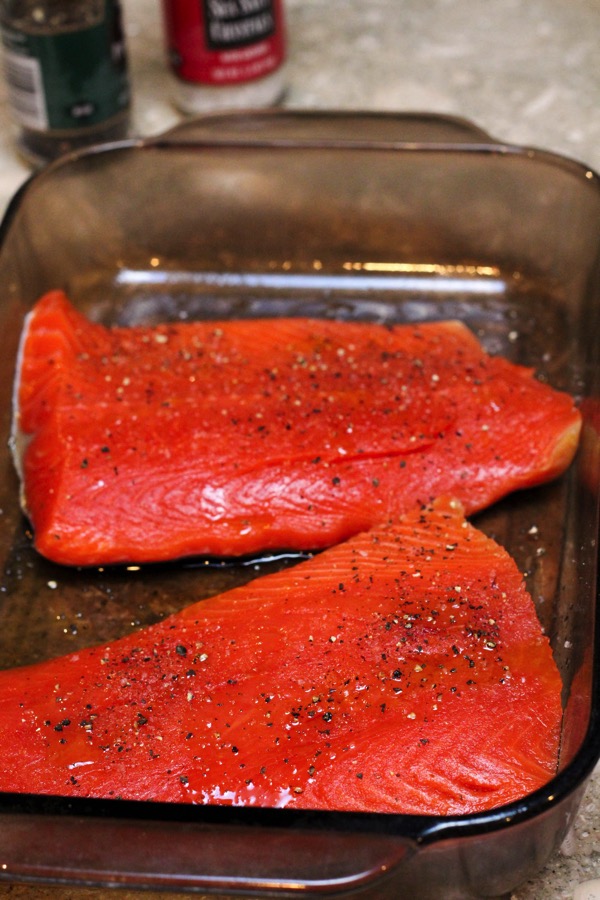 while white rice simmered on the stove. When the rice was soft and fluffy, I stirred in rice vinegar and set it aside. 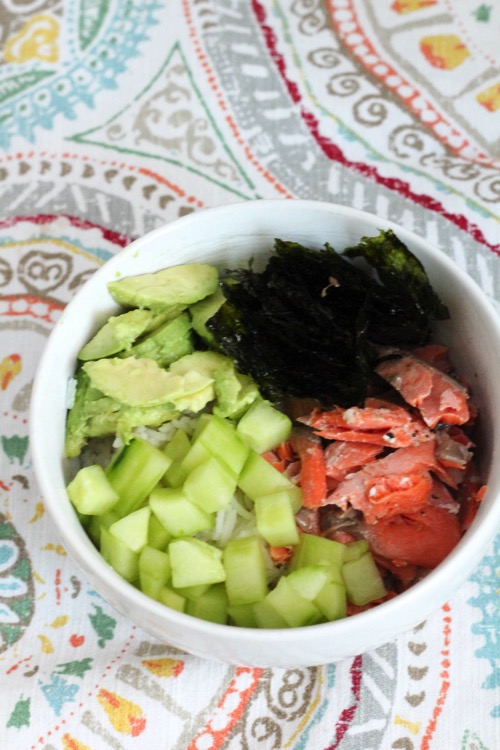 and drizzled it with soy sauce. The girls went CRAZY for it (the Pilot loved it too when he got home), and it was so satisfying. I was especially happy that Liv enjoyed it as much as she did. Sometimes kiddos can be hit or miss with dinners, and she told me a few times that it was amazing.

9:30pm big glass of Apothic red wine while watching This Is Us. 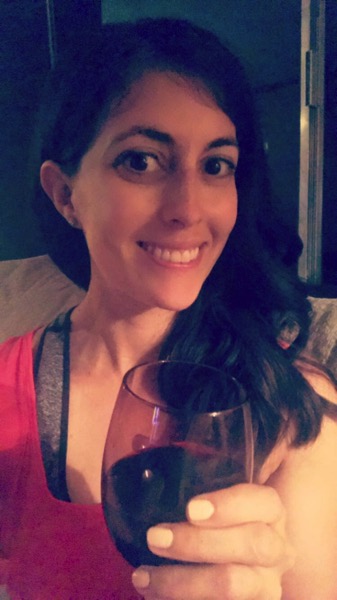 What I liked about this day of meals: I feel like it was a good mix of protein and produce, and I didn’t feel hungry since I was snacking throughout the day. I was also stoked to get a real meal on the table while doing the single parent ops for the evening.

What I would have done differently: I might have saved the donut for later in the afternoon. When I have something sweet in the morning, I crash and find myself craving sweets more throughout the day. While it was delicious, I would have loved it with some tea later on, and oats in the am instead. Either way, it was delicious.

What was the best thing you ate yesterday? Any awesome quick dinners you’re loving??

For the OG WIAW fun, check out Peas and Crayons!

ICYMI: A post about what type of cardio to do after strength training

Posted in wiaw and tagged wiaw