Does that phrase make anyone else break into a cold sweat? 😉 I kid… ok, half-kid.

Recently, I got this email asking about road trips with a toddler:

Hey Gina,
I was wondering if you would do a blog post about traveling with a toddler. We are planning our first lengthy car ride with our soon-to-be 1 1/2 yr old. I feel like a lot of other parents might like to share and receive ideas and tips for this as well. I have a few tips to get started:
• have no expectations or “set plans”
• stop frequently to let them burn some built up energy
• take several little books and toys and swap them out each time you make a stop to keep them interested
• maybe buy a new toy or book just for the trip and whip it out when they’re getting antsy
• snacks
• play music you know they like at times throughout the trip

These are just a few tips I’ve thought about but I would love to hear others’ advice. 🙂 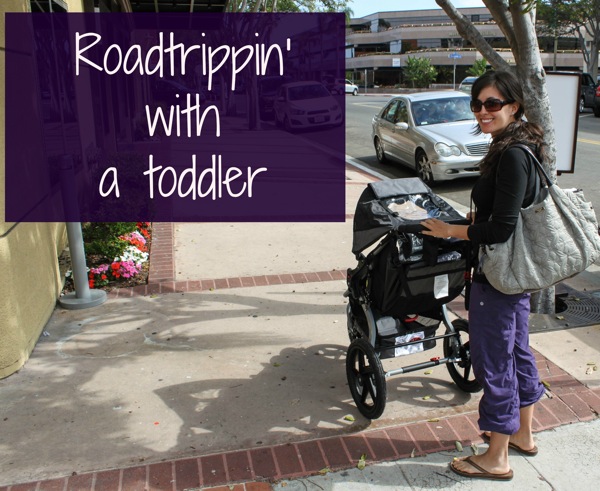 Roadtrippin’ with a toddler has proven to be a very interesting and very fun adventure…it just takes some extra planning and flexibility. When we recently left for California, I was hopeful that it would be a good experience, but also prepared for the worst-case scenarios (vomit bucket, anyone?). Last time we did a road trip, Liv ended up being sick with her first-ever virus. There were many phone calls made to the hotel lobby for extra bedding and lots of gratitude from us since they were so wonderful. My heart broke for poor noodle (being sick is the WORST) and after a couple of talks with her pediatrician we could to make it low-key but still fun for her.

Even though we’ve only done a handful of road trips with Liv (so I’m definitely not a toddler traveling expert!), I’ve found a couple of things to help:

1) No expectations. If you’re driving, take your time. This one has been fairly easy for us since that’s how we’ve always approached vacations. We’re just excited to have some time off work and hang out together; it doesn’t really matter what we do or when we get there. Of course, for larger trips, we have a couple of ideas of things we’d like to do or see, but we don’t plan activities out by the day. Doing so has been really helpful with Liv. Since we don’t have a set plan, it’s no prob to head back to the hotel for naptime or taking it easy with lots of exploring and people-watching.

2) Plan for everything. We probably overpack for Liv, but it’s nice to know we have what we need for her. Usually for each day, she’ll have 2 outfits and 1 jammie. We also take her pack n’ play, pack n’ play bedding, some toys, the video monitor, Twilight turtle, strollers (jogging and umbrella), books and baby Tylenol (if her teeth start to bother her).

3) In-car entertainment. Liv hates being in her carseat for more than an hour or so– can’t blame her at all. We take lots of breaks to stretch/snack and are thankful to the iPad for the in-car Elmo and Minnie Mouse entertainment.

4) Snacks, water, milk. We travel with these three things (plus some sippy cups, her portable placemat and baby forks)– everything else, we’ll pick up when we get there (like fresh fruit and sunflower seed butter).

5) Nap when the baby naps. For our last few vacays, we’ve taken afternoon naps along with Liv and it has been GLORIOUS. Usually at home, when Liv is napping, I’m working and the Pilot is at work. It feels like such a luxurious treat, and this way, if she doesn’t sleep well at night or wakes up super early, we still feel rested. We’ve been very fortunate that for the most part, Liv seems to have received the “vacay memo.” Sometimes she sleeps later than we do on vacation!

6) Try to stick to your at-home routine as well as you can. We still follow the same bedtime and nap routines (for the most part) while we’re on vacation. If Liv gets a nap, she’s as happy as can be, so it’s worth it for us to venture back to the hotel so she can get quality sleep. We do the same things on vacation that we do at home: brush teeth, put on fresh jammies, play her Jewel lullaby CD and turn on the Twilight turtle. I’ve found by doing this, she’s less creeped out about sleeping in a new place. If bedtime is later, it’s no big deal, especially if she had a good afternoon nap.

7) If you can, invest in a hotel room with a separate living room. Since Oliv still goes to bed fairly early, it’s nice to be able to have a separate room to watch TV or enjoy some room service snacks/cocktails together. This way, we sneak into bed later without waking her up. Otherwise, we have to turn the lights out and pretend we’re asleep until she crashes 🙂

8) Just enjoy the ride and the memories. Vacations as a family are special times, even the ones with snafus or rough patches. Our last La Jolla virus trip was a little stressful while we were going through it, but I’ll always remember it and can’t wait to show Liv the pictures when she’s older. The look on her face when she saw the seals at La Jolla cove was pure magic. 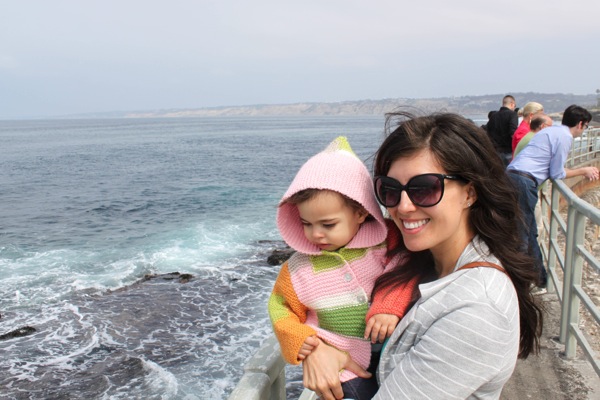 I’d love to hear your tips for road trips with a baby! What do you use for in-car entertainment? When do you leave (early, after nap, before nap)? Any packing strategies or words of wisdom?