Hey, everybody. Hope you’re having a lovely morning! I’ve had requests to provide some details on the sleep “challenges” that we’ve worked through. Of course, it’s important to emphasize the fact that what works for one family or kid won’t work for another. Some things that we did with Liv are totally ineffective with P, and the other way around. There are families who allow their kids to sleep in their beds, families who have their kids’ beds in the parents’ room, kids who have slept in their crib/bed from day one, kids who share beds, or a combination of all of the above. It’s all about choosing the best method for your family for that particular time. So, here’s what worked for us (or at least allowed us to survive), per many requests, but I feel a little vulnerable in posting this. Please be kind 🙂 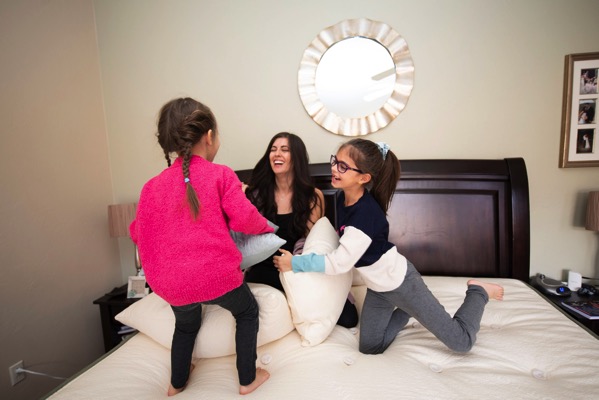 So we’ve had some…unique sleeping situations, especially since we’ve moved a lot (Liv has moved 4 times already) and the Pilot also travels frequently for work. When the girls were babies, we followed The Baby Whisperer’s method. It taught the girls how to fall asleep on their own, but didn’t involve “crying it out.” (I know that intense sleep training and crying it out works well for a lot of families, but it wasn’t something I wanted to do.) Using her methods (eat, activity, sleep, you time), the girls were pretty excellent sleepers from when they were babies until they were about 2 1/2. It was a little earlier for P, since she decided to catapult herself out of the crib for the first time when she was around 14 months old. This was when they realized they could get OUT of their room, and from then on, sleep was kind of a disaster.

We’ve had nighttime visitors sporadically for many years. It wasn’t every night, and in most cases, we could convince them to go back to sleep after walking them back to their room. Having said that, there were plenty of nights when an irreconcilable little face of tears just didn’t want to go back to sleep on her own. Since we were often too exhausted to deal with it, we’d either sit in their room until they fell back asleep or let one or both of them crawl into bed with us. For a while Liv was waking up multiple times throughout the night, so as a temporary solution in our busy lives, we let her sleep in a cot on our room. When we finally ditched the cot after a move, we tried to incorporate more consequences for the nights when they come into our room. However, this method proved ineffective, because in the middle of the night, they didn’t care about consequences to their actions in their delirious, half-asleep state. We tried putting them in a bed together to see if it would help, but it didn’t make a lasting difference over the long term.

All of this took place AFTER we got them to sleep which could be a struggle on its own. Sometimes to get them to sleep, we would find ourselves stuck in what we jokingly called “bed jail”: lying with them until they fell asleep. The reason for this was because even if one girl fell asleep just fine, the other might have some anxiety about it, then she would cry out and wake the other. It was a vicious cycle. For some people in a similar situation, it’s worked to just lock the door (switch their doorknobs to lock it from the outside) to force them to just cry it out and deal with it, but that’s not how we wanted to handle it. I remember what it felt like to be small and very afraid of the dark and being alone at night, so we wanted to find a solution that avoided the potential for that.

This is a tough sleep situation for two people, but it because virtually impossible to survive with just one. So, when the Pilot left for his deployment, I let the girls stay in our bed when they came in during the night, and after a few months of multiple nights of inadequate sleep, I let them fall asleep in our bed. I will say that for those few months, we slept amazingly. During winter break, we slept in until 9 or 9:30 most mornings and it was MAGICAL. But the deal was when Tom came home, they had to start sleeping in their own rooms. When he came home, we found ourselves back in the old, imperfect sleep patterns. We knew this wasn’t sustainable, so Tom did a bunch of research, and we reached out to an expert for advice because nothing we tried was working.

Now, after chatting with Heather from Sleep Shop and following her steps in combination with this sleep plan, they both fall asleep on their own, sleep in their own rooms…and stay there all night. No locked doors, no drastic consequences, and no meltdowns.

I NEVER thought this would happen.

It took consistency, and about 3-4 nights of being awake a good part of the night, but we did it!!!

Obviously, I can’t post everything Heather told me to do on the blog – that’s how she makes $$ – but here are some of the things that helped:

– Having a true bedtime routine that starts about the same time every night. All of the steps were usually the same, but now we follow them in a precise order so they know bedtime is coming: bath (if I don’t wash their hair I just put it in a high bun), jammies, brush teeth, read them 2 books, goodnight.

– Explaining the rules of the during the day as a heads up and before bed, after books, as a reminder. For them, knowing that we’d check on them every 10 minutes until they fell asleep (even in the middle of the night) was huge in cutting their anxiety to virtually zero. After the first few nights, they know we no longer check on them after 10 minutes if they happen to come out of their bed in the middle of the night, and they’re content to just be walked back to bed and tucked in. Now we typically only check on Liv once, and maybe a few times with P.

– Walking them back to bed, every.single.time they came out of their room. This is exhausting and we probably walked them back 300 times the first night. After the first night, we took shifts. The Pilot got the 11pm- 3am shift and I did 3am-7pm.

– The Ok to Wake clock. Liv hated this thing but it works beautifully for P. She’s so proud of herself each morning when she’s stayed in her bed until her clock is green.

– Getting some extra sound machines. Upstairs was way too quiet and even though Liv had a sound machine, we also got one for P’s room.

– Consistency. This is where I’m terrible but the Pilot is a rockstar. I was SO tempted to just lie in bed with them or let them come into our room just once, especially when they were coming out of bed 8,000 times (and when P was under the weather), but once we committed, this wasn’t an option. He helped me keep my eye on the prize.

– Remembering that it always works! Heather was so reassuring and she said that it always works, but for some kids, it takes longer, up to 2 weeks. When we committed, we were ready to be totally sleep-deprived for 2 weeks, but it only took 5 nights. Each night was easier than the last.

So there ya go! We’re sleeping like normal humans and IT IS AMAZING.

I was hesitant about writing this post because I’m the opposite of a sleep expert – we slept terribly for years haha – but if you need help, I highly recommend Sleep Shop. We had such a great experience, and they don’t know I have a blog or anything like that. It was the best $100 I’ve ever spent.

Posted in mumbo jumbo, something to talk about, today's tip