I’m about to take a little snooze before my friends and I head to our midnight date with vampires. I’m so ridiculously excited 😀

Afternoon snack was the other half this mornings’ Ezekiel before doing legs with Jeni: 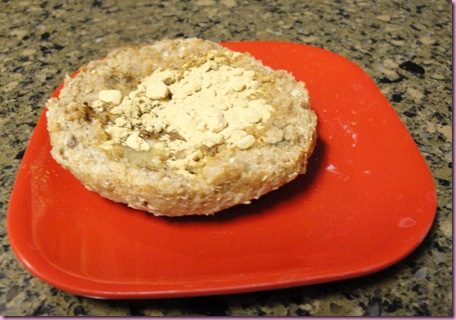 We took it a little easy today, and stopped to chat with the pilots that were there working out 🙂

I had two awesome training appointments (one with funny quote lady) and then came back to the puppers. 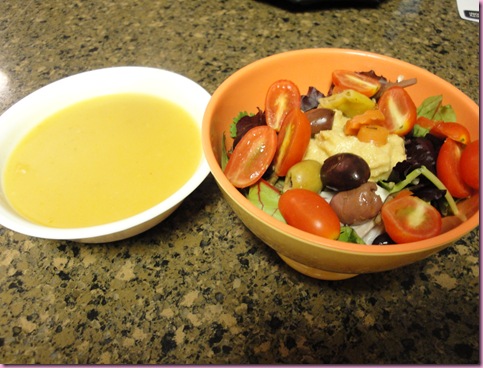 1 cup of Amy’s vegan Butternut squash soup and a salad with hummus, olives and grape tomatoes. Pretty tasty, but nothing crazy 😉

So I try to keep things from being toooooo personal, as I post for the world to see, but thought I’d talk about some girly stuff for a second. (Guy readers, feel free to say adios, haha)

Well after twelve years of being on the Pill (TWELVE!), I stopped taking it two weeks ago. The reason I started taking it in the first place was for medical reasons, then it eventually became necessary for well, other reasons 🙂 I did quite a bit of research for the past few months and decided that after making such an effort to rid chemicals from my diet, I didn’t want to continue putting them into my body in the form of synthetic hormones. The pilot and I aren’t planning on little Fitnessistas or pilots at this moment, but I’m in a position where if it were to happen, it would be ok. I’m not knocking the Pill in any way, because obviously it worked well for me, for many years; however, I felt like it was a good time to rid my body of all the extra chemicals and begin to understand my cycle.

Before stopping the Pill, I read a book called “Taking Charge of Your Fertility” which I couldn’t possibly recommend enough. It really is a book that every woman should read and it teaches how to understand what’s going on with your body and a totally natural form of birth control (for monogamous relationships)  in which you track your cycle. It was a fascinating read and taught me WAY more than I learned in the goobery 6th grade class we all had to take 😉 So every morning I jot down my temperature right when I wake up, and keep track of other signs that indicate fertility.

So how do I feel? AMAZING. Even though I never really felt bad while I was on it, I feel like myself again. It’s like when the Wizard of Oz switches from black and white to color. Ok, not that intense, but I feel pretty dang good 🙂 I’ve never really had to deal with skin issues and was horrified my face would break out or something crazy would happen, but so far so good (*knock on wood*). The only bummer things about it is that I’ve been a little extra tired lately and I just feel slightly wonky from the hormones trying to balance out again.

Well I’m gonna take these puppers out and get ready for my date with Edward. I’m wearing sweats and a hoodie. I hope he thinks it’s seksi 😉 Haha

See you in the morning, or mid-morning.. I have a feeling I’ll be sleeping in a little.