For this week’s Focus On post, I wanted to choose something that’s easily accessible to everyone: inexpensive and doesn’t matter which city you’re in. Resistance bands are the first thing that popped into my mind. They’re super lightweight, compact and you can get an amazing workout using these, wherever you are. 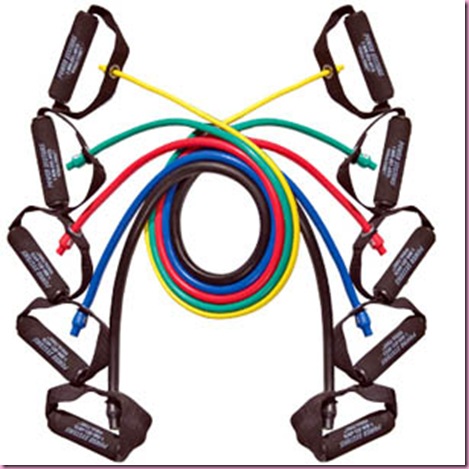 What is it: Resistance bands are long rubber bands with handles, that are used to perform strength training exercises. The resistance is provided by the elasticity of the bands (the thicker the band, the more resistance it provides). The typical use for resistance bands is to stand on the band and perform traditional weight training movements (like bicep curls, or lateral raises), or you can use one handle at a time (tricep extentions), or use a door attachment to increase the variety of the exercises you can perform (rows, chest flyes, etc). 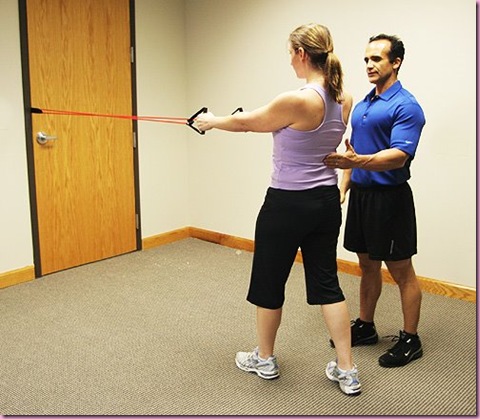 The amazing thing about resistance bands is that you can increase the difficulty by changing your position –if you’re using a door attachment, stepping farther away from the door, or if you’re perform a traditional movement, shorten the length of the band you’re pulling by stepping closer to the handle, or pulling the handles over your shoulders- and unlike traditional weight training with dumbbells, some moves are much more challenging with the resistance band. For example, if you’re doing a bicep curl with a dumbbell, as you pass the 90* point, the movement will become easier. With a resistance band, when you pass the 90* point of the bicep curl, it actually becomes harder because you’ll pulling against more resistance.

If a certain band gets too easy for you, you can just pick up a thicker band.

One of the guests at work asked one of my friends (coworkers) if she’ll be able to achieve her desired results by using resistance bands instead of weights. He had a really great response: “Pull on the handle of the resistance band. Now close your eyes. Does it matter what you’re pulling against? It could be a can of soup, a dumbbell or a resistance band- you’re still strength training.”

Light resistance bands are also a great choice for those who may have joint problems or arthritis.

Some of my favorite exercises:

*Here’s a great site with quite a few* 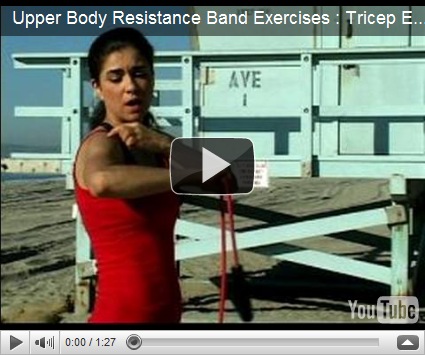 [Apologies for the blurry pics, but I really liked these exercises] 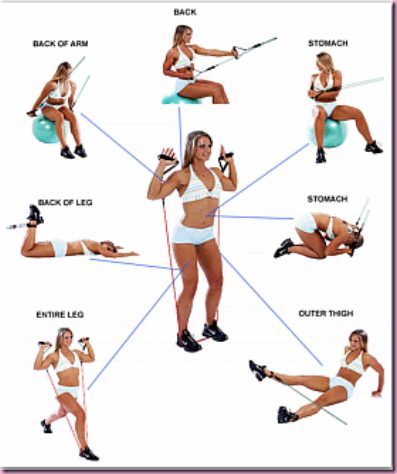 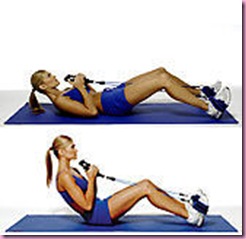 DVDs: There are quite a few resistance band training DVDs out there. The best I’ve tried so far is the Tone DVD from TurboFire. Chalene does some sick moves, and I’ve had the DVDs for over a year and still can’t finish the entire resistance band workout without stopping for a break. 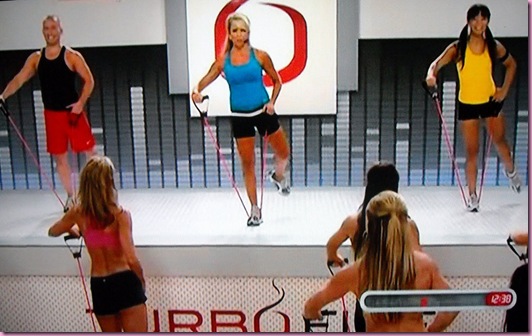 Cons: The only con I can think is the lack of cardio options with resistance bands, which is ok, since they’re intended to be used for strength training. The only cardio I’ve managed to do with it is loop it into the door attachment, face away from the door with both handles in my hands, step away from the door and bringing my hands to the floor before going into resistance mountain climbers. Pretty killer 🙂 If you’re planning to travel and use resistance bands, just pack a jump rope with you. Insane cardio and takes up minimal space in your suitcase 🙂 If you know any other resistance band cardio options, let me know!

Do you use resistance bands for strength training? What’s your favorite exercise?