Hi friends! How are you? Hope you’re having a lovely week. I’m still dragging after returning from Chicago, but am slowly getting my mojo back. I got very used to staying up until 2am Valdosta time and sleeping in. I felt like my phone was taunting me when the alarm went off this week, but it was WAY worth it; we had such an amazing time.

Chicago, you are so pretty. 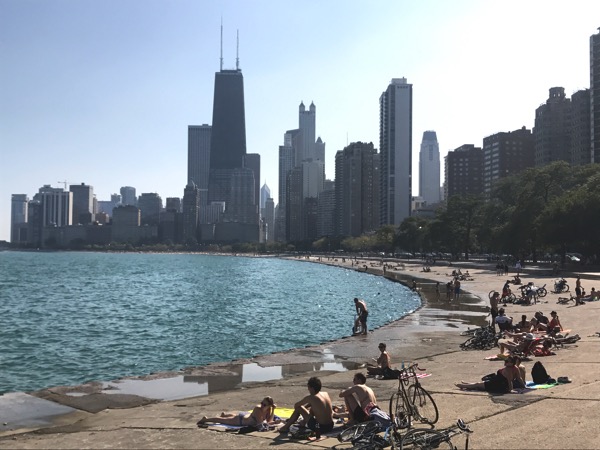 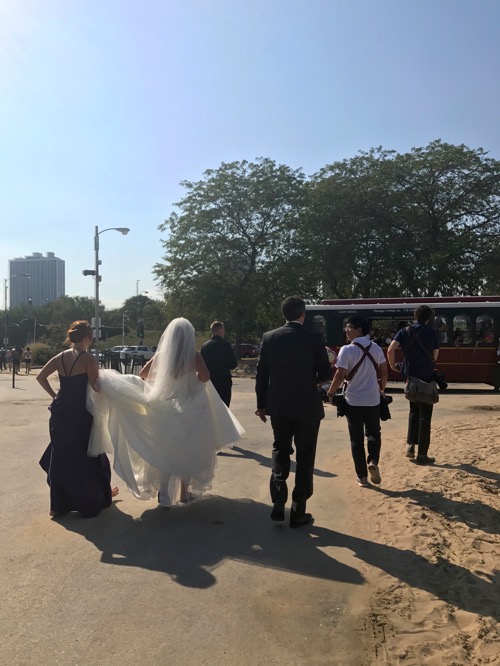 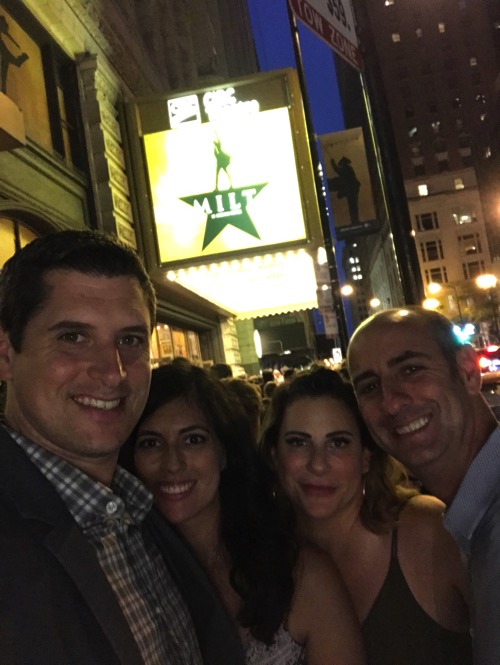 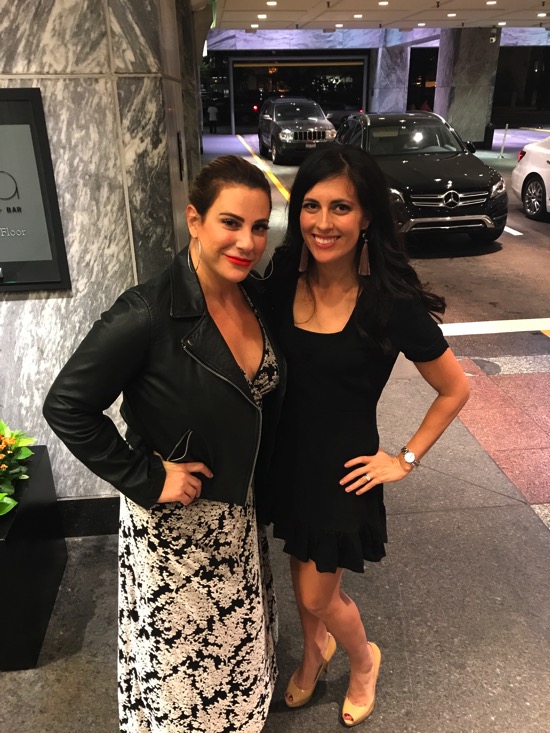 When we got into Chicago, we took the train downtown and checked into our hotel: the Ritz-Carlton Chicago. The Pilot said I tricked him because it’s located in the water tower building, which is a 6-story shopping center. (Apparently OPRAH USED TO LIVE IN THAT BUILDING.) These things don’t happen by accident haha. Betsy and I also chose this hotel because it was in such a great location: surrounded by shops, restaurants, and fun opportunities to explore.

The room was beautiful. It had a sitting area with a couch and a couple of chairs, two bathrooms, a comfy bed + magnificent views of the city. 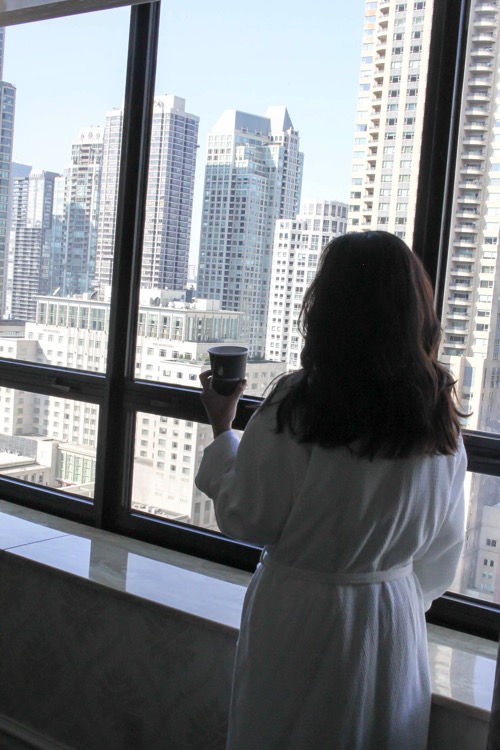 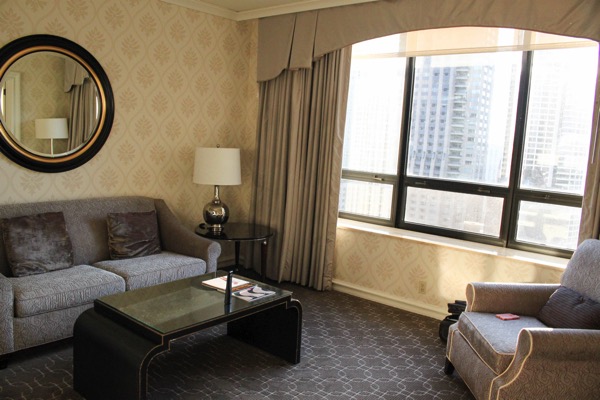 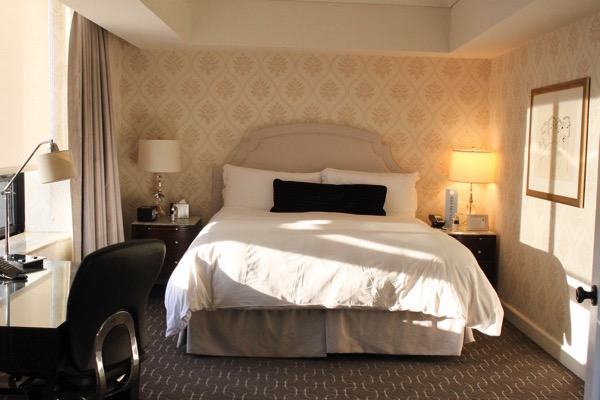 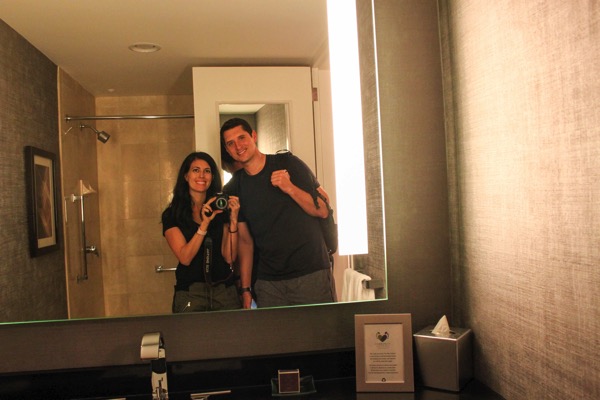 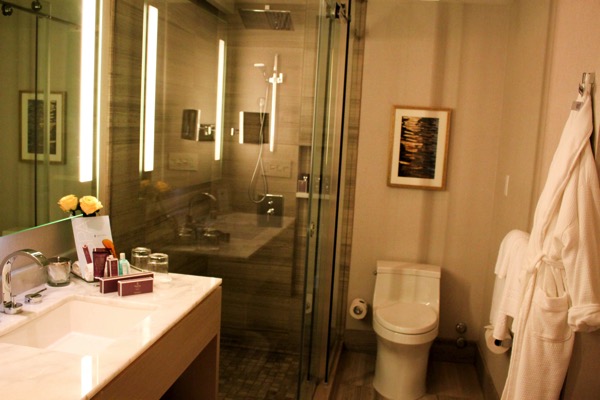 When we walked into our room, we were surprised to see chocolate-covered strawberries and a little card for our 10th anniversary. It was an awesome touch. 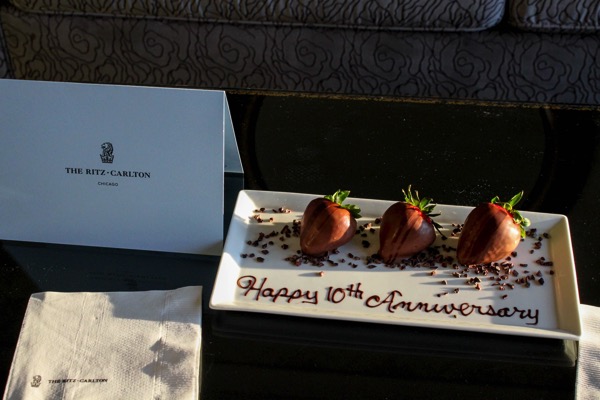 We met up with Betsy and Jeremy to walk around the area, and then got dressed for dinner at Alinea! (The full recap is here. It was one of the best meals of my life.)

In addition to all of the amazing food we ate, we also enjoyed a lot of unique Chicago experiences.

Here are some of the highlights: 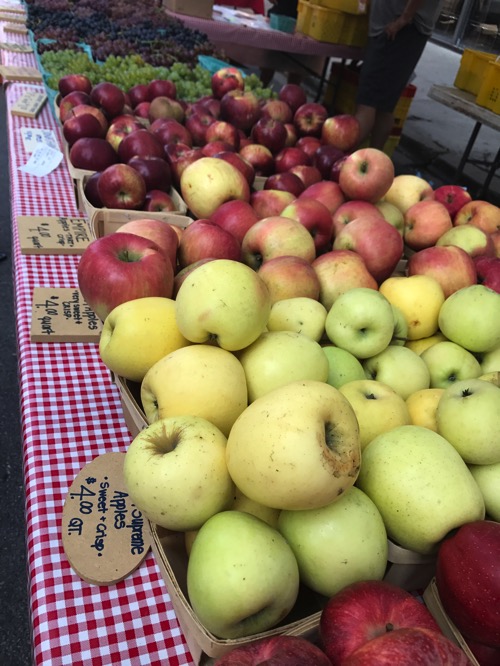 While we were walking to meet Mara and her family for brunch, we wandered through a farmer’s market. I love getting the chance to explore local farmer’s markets when I travel, especially since it gives me an idea of the fresh produce in the area, the types of handmade and artisan creations they offer, and we can check out local artists and musicians. Something about walking around a farmer’s market with a fresh juice makes me really happy.

While we didn’t pick up anything to take home, and didn’t eat anything since we were on the way to eat brunch + every dessert on the Nico Osteria menu, we did pick up some cute pumpkin branches to take to Mara. 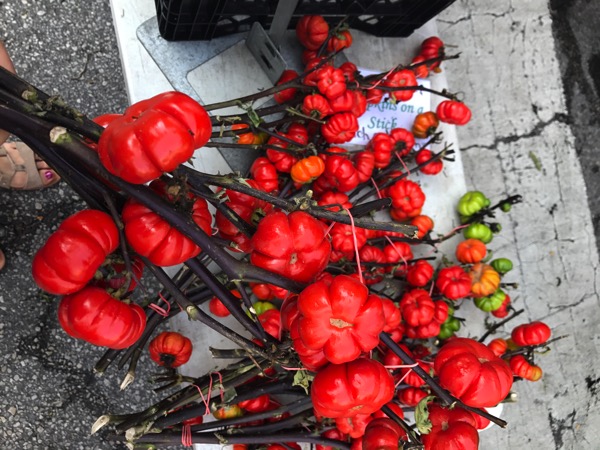 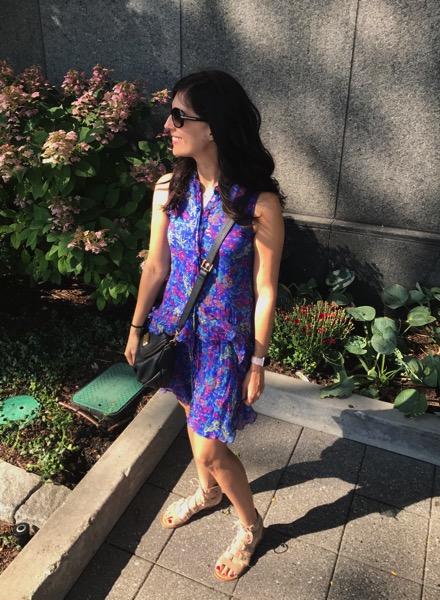 This was completely accidental, and we meandered in on our way to Lincoln Park. It was fascinating to get a glimpse into the history of medicine and pharmaceuticals -we’ve come a long way, folks- and some of the old medical tools and instruments were very appropriate for Halloween-time. 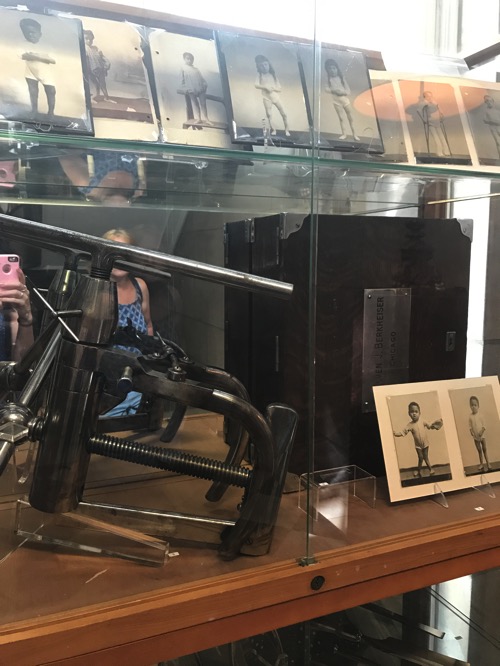 The above picture is of a bone crusher that they used to use to break bones and reset them in proper alignment… minus anesthesia, natch.

Chicago is an architectural wonder, especially since it rebuilt itself after the great fire that destroyed a vast majority of the city. While the fire was tragic and thousands of locals were left homeless, Chicago quickly rebuilt itself. The architects who came in saw the land as a clean slate. Chicago is one of the cities where the skyscraper originated, and you’ll see so many different styles and unique details on the structures.

My dad is an architect, so since I was young, I’ve always been intrigued by design and ornamentation of houses and buildings. When Betsy suggested the boat tour, and so many people had suggested it, we thought it would be a fun afternoon activity. We hopped onto a boat on the river, and on the 90-minute tour, we learned a lot about the history of Chicago and the different buildings. I would highly recommend it if you’re traveling to Chicago! 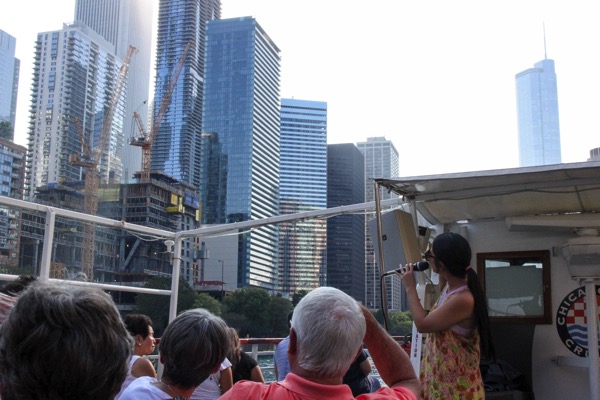 My favorite story was about the old Post Office (where the Batman movie Dark Knight was filmed) and the fact that it’s been vacant for 20 years. Now, they have a permit to turn it into a residential complex and are quickly transforming it. For now, it looks pretty creepy, but I’m sure it will be fixed up and sparkling in no time. While we went up the river, we also found a lot of goals areas where we’d like to live. (If it didn’t snow so much and turn into a frozen tundra, I would want to live in Chicago.) Noteworthy: the boat had a full bar + free cookies. 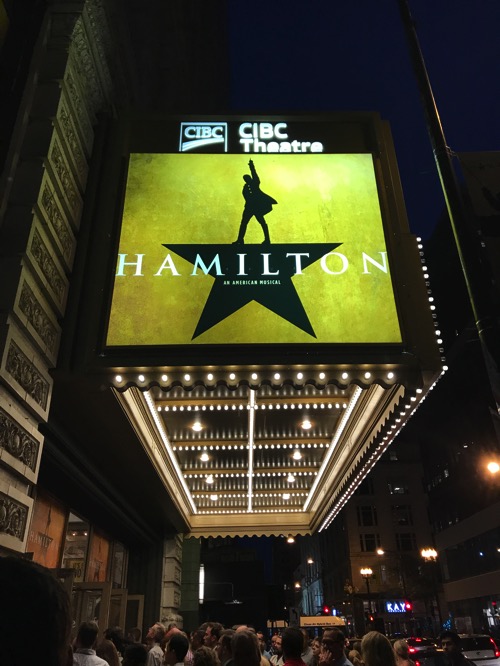 As you guys know, I’ve been obsessed with Hamilton for at least two years. (I even dedicated a workout to my Hammy love. #truefan.) Despite playing it constantly, I’m still not sick of the soundtrack.. and Liv and P know some of the words. Maybe inappropriate. Who knows. 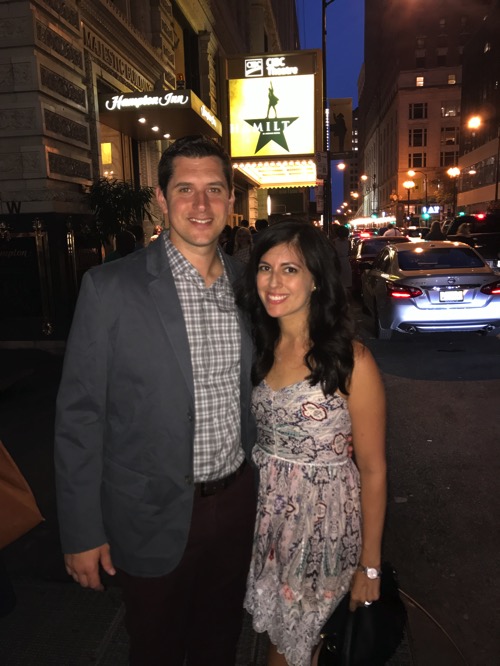 For our 10th anniversary, the Pilot told me he’d take me to see it. We were originally thinking we’d go to NYC, but when we heard it was playing in Chicago, and Betsy and Jeremy had suggested a joint vacay, I thought it would be the perfect opportunity. Thankfully we were able to snag some tickets, and it felt very surreal when we were finally in the room where it happens. 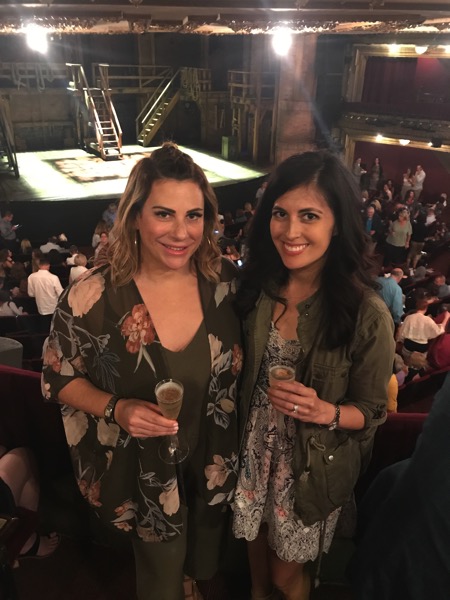 We grabbed glasses of champagne, and we took our seats. 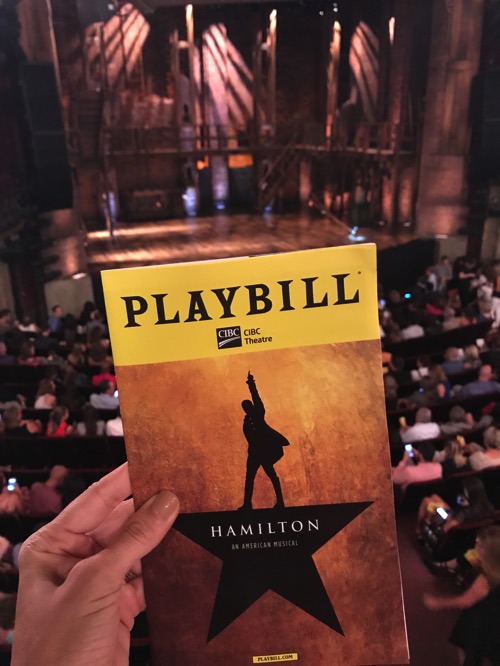 Even though I was extremely excited and had been looking forward to it for months, I was expecting to be the smallest bit underwhelmed. Don’t get me wrong; I was sure I would LOVE it, but in my heart, nothing would compare to Lin-Manuel Miranda and the original cast. I thought maybe this particular cast would try to “copy” the sounds and styles of the original cast members. I was SO so wrong. Everyone brought their own unique style, nuances, and flavor to their characters. Their voices were INSANE, and I had the chills the entire time. I also cried pretty much the entire second act. 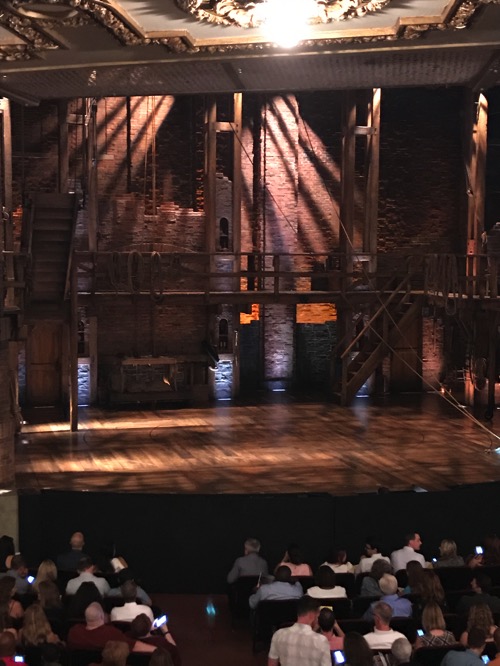 Miguel Cervantes was beyond incredible as Hamilton. We got to meet him after the show, and he was so kind and humble. 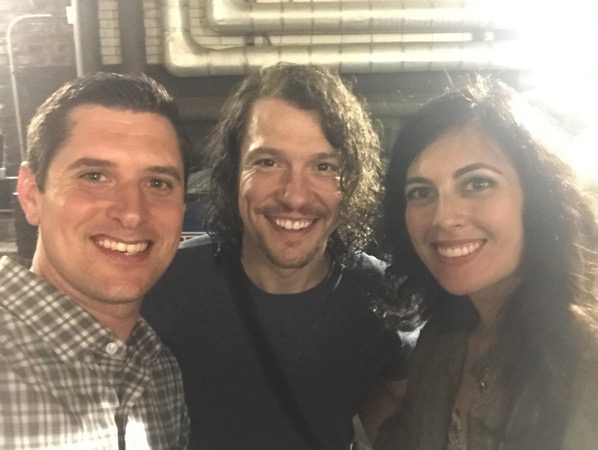 Everyone was amazing, but King George was particularly hilarious (the audience was cracking up during his numbers) and Aaron Burr. He blew us all away. He had so much heart, and a strong, incredible voice. 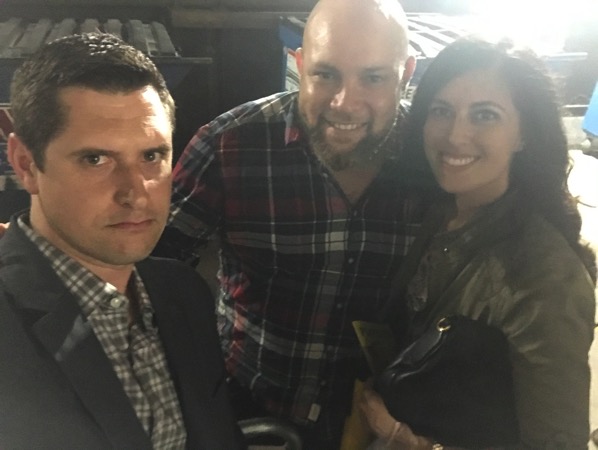 (Gregory Treco. I failed on making a mad Aaron Burr face for the pic.)

It felt like such an honor to be able to witness that much talent and hard work in one room. Something else that surprised me: the dancing. Since I’d only listened to the soundtrack, it was hard for me to picture the ensemble and the dance numbers. The choreography was astounding. Some numbers were more like interpretive dance, but over the course of the show, it ranged from modern, to hip hop, to ballet, and classic Broadway jazz. There were so many pieces that went into place so perfectly, and it was by far, my favorite musical experience. I seriously had to hold it together while we were leaving because I was about to start sobbing like a weirdo. I was just so happy.

Best anniversary gift, and trip, ever. <3

Have you been to Chicago? What was your favorite part?

If you could live anywhere, where would you choose?

Shout out to reader friends Julie and Melissa who said hi and chatted for a bit at Nordstrom! I loved getting to meet you. <3